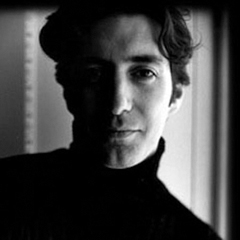 Approached by Paolo Cherchi Usai, whose work with the Pordenone Silent Film Festival is legendary, in March of 2009, Spinelli was asked to create a new score for Sunrise using, “a single guitar, very distorted.” His first thought was, “How do you do it? No.” Five minutes later he said, “Yes.”

After the ramifications of what he had gotten himself into sank him, Spinelli then thought, “How many times do you see a great electric guitarist alone? Without drums or a bass you feel naked.” He also had to figure out how to make 90 minutes worth of score that would stay compelling because, “No matter who you are, you could be Jimi Hendrix, and after twenty minutes of the same sound it will be boring.”

But before he could even think about the music, Spinelli had to find the right technology for his needs. The first necessity was finding the perfect looper. “The first 18 months was experiementing with looping.”

Eventually, Spinelli found a company called Looperlative. Working with a looper, Spinelli must make sure his score, “Loops in sync with the film. . .it has to appear seamless.” Performing solo, this was something he had to do on his own.

As for the score itself, Spinelli was partially inspired by post-punk era bands like Joy Division. Spinelli said, “the darkness of that era of music is similar to the darkness that the film was coming from.”

Which brings us to the weeks leading up to the show. Spinelli said, “Ten days before the event my main looper died,” Spinelli said. Luckily, a good Samaritan from Santa Cruz lent Spinelli a backup. “What if this happens during the show? Two years of work down the drain.”

Leading up to the show Spinelli was, “exhausted for months,” but through yoga, massages and a secret warm-up playlist, he was ready to go.

“On Thursday morning, from my hotel, I saw a beautiful pink sunrise and I knew everything was going to be alright.”