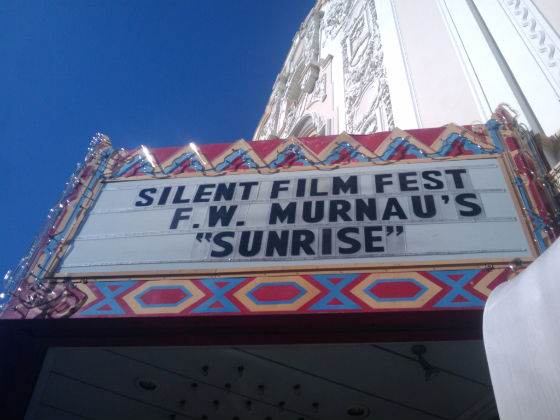 Despite all the premieres of newly restored and newly discovered silent films during the 16th Annual San Francisco Silent Film Festival last weekend, perhaps the most spectacular event of the weekend was also one of the most controversial.

The second film featured on the opening night of the festival was F. W. Murnau’s 1927 classic Sunrise: A Song of Two Humans, but with a twist; the screening featured the world premiere of a new score by Giovanni Spinelli — composed solely on electric guitar. Much ado was made in the previous days of the festival about new scores vs. original scores accompanying the films.

Spinelli wasn’t the only musician playing a new score for a film screened during the festival — the Mattie Bye Ensemble and the Alloy Orchestra also accompanied films with their new compositions. What mades Spinelli’s score so controversial was its complete departure from traditional instruments; the score was composed and conducted using only an electric guitar.

Intrigued by the originality of his new score, YAM Magazine managed to talk briefly with Spinelli about how he came to work on this score, what kind of work went into creating it and how he prepared for its world premiere.