Back in 2006 I was paying attention to the World Cup because the Koreans were crazy about it. During one of the segments I heard a song and did some research. Turns out it was YB’s arrangement of the Korean national anthem & ever since that day I’ve been a fan of YB. But not only that, learning that Korea has such a rich and diverse indie and rock scene through YB meant that I stuck around in the Korean music world. YB has been around since 1994, but that doesn’t mean they’re the same old band. They’ve updated their sound continuously, keeping up with changing music trends, new ideas, new sounds, and even adding a new member. Throughout all of this change YB has managed to remain one of the most outstanding examples of how Korea blends the soul of rock and roll with the essence of Korean musical heritage. I think that’s what connects them so deeply with their audience. This isn’t just rock music, it’s Korea’s rock music.

This March while YB performed at two official South By Southwest showcases and spent some time supporting the other Korean acts that came to the festival, lead singer Do-Hyun Yoon and guitarist Scott Hellowell found some time to talk with YAM. Read on for what they had to say, and get to know a bit more about YB. 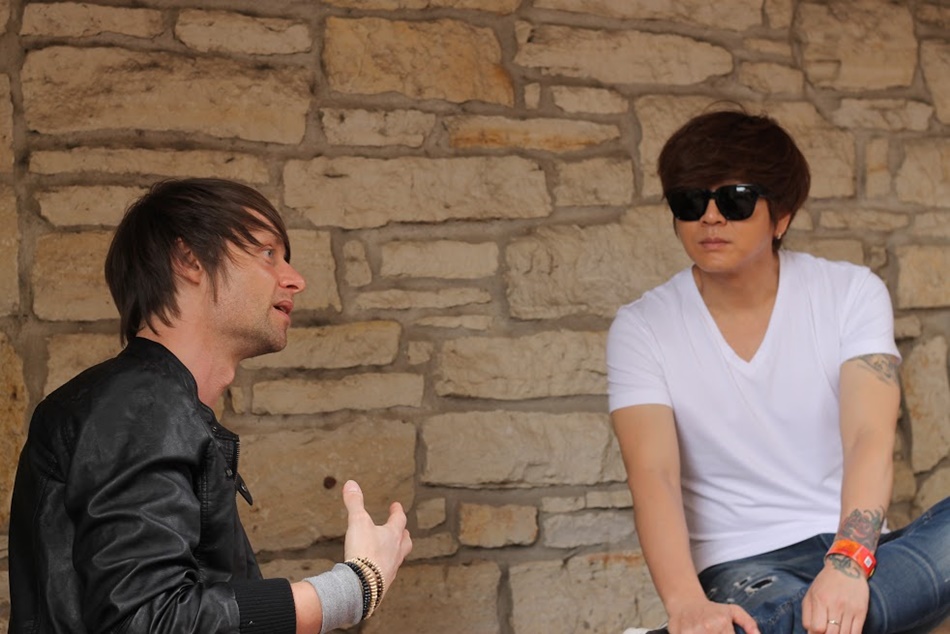 Last year you released your first English track to the Western market and now you have a great team behind you to help you enter the market further. What are your hopes and goals for this new journey?

Scott: By opening some doors, you know, it’s always been a question about going to the west, it’s a case of getting on with it a little more and opening some more doors. We do have fans over here and it’s really time to go out and explore that, you know what I mean. If people ask why we haven’t been doing it before we’re really busy in Korea, it’s really crazy. So having a team and having a plan lets us put that into our Korean schedules and get out into the rest of the world.

I know your whole set last year at SXSW was in English, what was the process for translating your lyrics? How were you able to retain the original meaning and express the same feelings in another language?

Scott: Yeah, we really pushed for the English last year. It’s quite a difficult process. Learning to translate your own songs is a bit hit or miss in the beginning. I think at the stage where we’re at now, we have a different view point about it. We’re trying to balance some of the things we sing in Korean and the energy that has. The translations, some of them we don’t even translate, we just kind of re-write the song in a new sort of fresh way. So I think whereas before we had a straight way to do things, we’re kind of trying out lots of different ways. But it’s definitely not easy.
Do-Hyun: It’s not easy. Cuz we’re too different emotionally, feeling, culturally. That’s why Scott said new lyrics much easier than translating.

Scott: Yeah, cuz you have all your cultural connections to the way a phrase is sung and to translate that, maybe that doesn’t have any resonance in the U.S. So It’s really hard. You’ve got to go back into imagining you’ve never heard the song before and thinking about what that emotion is.

It’s almost like deleting the fact that it’s Korean and then thinking “Oh what’s he singing about?” And then we could write a lyric off that. But it’s everything, sometimes the translation provides you with a little sort of doorway into that song, you know what I mean? Sometimes I’ve looked at a song and just pulled out something from the original lyric, and then just made a song from that one kind of feel. Then it retains a connection. We’ve thrown away loads of songs, we haven’t released everything we’ve translated. It’s better to just have an open mind about it.

Scott: We had a lot of writers.

Do-Hyun: So many writers.

Scott: We sort of kept it to more to ourselves this time. We decided to learn the process better. It’s all about experimenting.

Do-Hyun: Also, I recorded for over 10 hours. I was crazy. I wanted to quit music.

Scott: Actually it was like 15-20 hours, just trying stuff out.

Lots of repetition in the studio can get really frustrating after awhile.

Scott: Yeah, yeah, you just kind of change the nuance of something. It’s very hard.