The Future is Beautiful – Interview with Rapsody

You have such a distinct voice and seem to just have this incredibly positive energy about you. There’s a pretty heated debate about the state of hip-hop in general and about women in hip-hop particularly. What’s your take on the newest mainstream model of the “female MC”? What do you think of that title (“female MC”)? 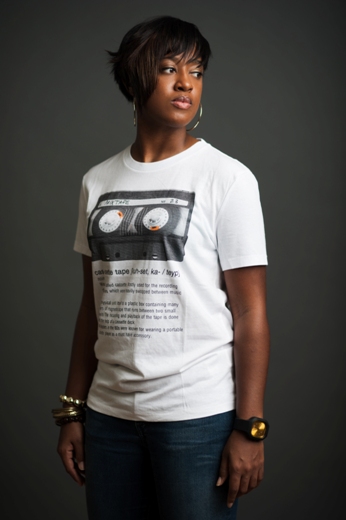 Nikki [Minaj] (let’s be honest, that’s who we are discussing since she is the only model we have in mainstream) is working hard and doing what makes her happy. She got people excited and the conversation started on “where are all the ladies”. There is room and a lane for everyone, men and women. I’m just tired of hearing the same long song over and over by different artists. Everyone sounds the same. We need more variety across the board.

But, the great thing is, outside of TV and radio we have that balance. You just have to search for it outside of those mediums, and change the way we think. The best music won’t be on TV and radio, and signed to majors, a majority of the time. Those mediums are ran by the mighty dollar, not the quality of music. And the times are definitely changing in our favor. The choice is more ours via channels like YouTube, Spotify, Google Music, iTunes, satellite radio, etc. So ultimately, support the artist you do like.

That’s true. While there’s a lot on the radio that’s not for everybody, there’re so many more outlets nowadays to find those artists you’d never even think of. As for me, I just discovered the depth of 9th Wonder myself. When did you meet him and when did you know that you wanted to be a part of to the Jamla/It’s A Wonderful Life family?

I met 9th in mid 2005, and he took a liking and interest in the music. So, he took me under his wing and coached me throughout the years. We built a good relationship and I liked his vision and he shared so much knowledge, it was just naturally the best fit for me.

Your first major piece of work Return of the B-Girl is a tremendous piece of work. What drove you to take on such a huge project?

The Return of the B-Girl was my first piece of work as a solo artist. I just wanted to make a dope project, and learn more and make something even better than the last, etc. I just wanted to grow, and I had to start somewhere. That project was a great start, but I still had so much to learn and perfect in my craft.

It wasn’t me taking on a “huge project”, it was me just doing what I love and creating the best music I could at the time, and letting the people decide on how huge it was. It was my introduction to the world, so I just got in the booth with did the best I could, and had fun.