The Future is Beautiful – Interview with Rapsody

One of the most precious things about being a writer for an entertainment outlet is being there when a new artist starts to emerge as a force in the industry. Indeed, when I first started writing for YAM, one of the things I’d always done and wanted to continue to do was introduce the world to artists who are creating something magical. In August, I had the distinct pleasure of discovering Rapsody for the first time. Whispers of the second coming of Lauryn Hill, the rebirth of hip-hop constantly wisped around me. Finally, in September I decided to see for myself what the fuss was about. I mean, anyone who even comes close to the power and fire of Ms. Hill must be someone that I’ve got to watch out for.

What I heard was something I wasn’t quite ready for. The Idea Of Beautiful [1] is truly one of those pieces of rare magic you stumble upon and don’t quite know what to do with. It’s simple, yet intricate; unpretentious, yet completely intelligent. Rapsody’s is a sound that’s not only unique, it’s completely unmarred by the world, an honest and pure form of hip-hop that I’d not heard since… well, Miseducation… With that in mind, I decided I just had to speak to this woman.

When she granted me the privilege of an interview, I’m not gonna lie, a kind of had a fangirl moment — flailing my hands and smiling until my face hurt for 20 minutes afterward. I wanted to get to know her, get to figure out exactly what it is that makes her who she is — not just Rapsody the MC, but Marlanna Evans, the spirited young girl from North Carolina with a style as easy and natural as taking a stroll down the street. We discussed everything from her inspirations to her start with group Kooley High and where she wants to take her work in the future. 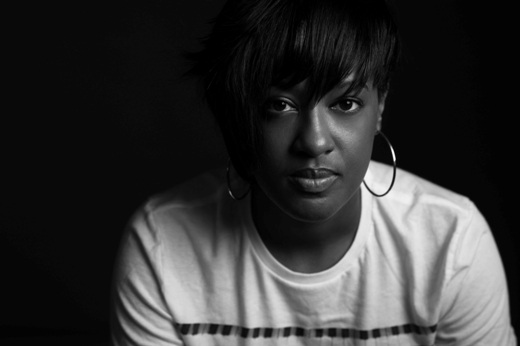 First I’d just like to let people get to know a bit about you. What was life like growing up in Snow Hill, NC?

Life was good. It was the country. A lot of playing outside, barefoot, when I was young, spending time with family, going to the Kingdom Hall, etc. It was a lot different from growing up in a city because there wasn’t as much to do, and you were exposed to less culture and the arts. But, it was good living nonetheless. I got all my musical needs through Yo! MTV Raps and the like. You could always find me sitting on the floor in front of the TV watching videos.

When did you know that music was the way to go for you?

Michael Jackson made me fall in love with music. I couldn’t sing though. I knew that at a early age (laughs). But when I saw MC Lyte’s Poor Georgie video [1], I knew what I wanted to be, and that I could be that regardless of my gender.

I know that Lyte’s definitely a big influence for you, as well as many other young girls dreaming of going into hip-hop. You also mention Queen Latifah and Lauryn Hill as influences. Besides Michael, what other artists outside of the hip-hop sphere have influenced you?