Rock music in Korea has long been an underground scene. What’s the most difficult thing about being a rock band in Korea?

Jong-Hyun: The Korean rock music scene is really small and it doesn’t get a lot of attention from the local media. That’s slowly starting to change, though. Korean rock bands are starting to get a bit more attention and are being offered some more opportunities to do things at home and abroad. Being a musician is a tough profession in any country though. That’s not something that just happens in Korea. 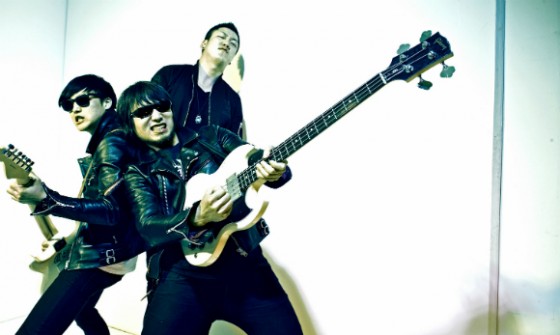 Galaxy Express was featured in the film Turn It Up to 11, which was a great way for fans to get to know more about you (I know I loved watching it). What was the filming experience like?

Jong-Hyun: The director of Turn It Up to 11 is Baek Seung-Hwa, the drummer from the band Tobacco Juice. Galaxy Express and Tobacco Juice used to be on the same label, and Seung-Hwa has been our friend for a long time. He shot footage of us for two years. When he first started filming us, it was uncomfortable. We kept telling him to turn the camera off! But we got used to it.

Who or what inspired you to become musicians? Any band in particular?

Jong-Hyun: The first time I watched Nirvana play on TV I decided I wanted to learn how to play the guitar. Shortly after that I saw Crying Nut perform on TV too. They were acting crazy onstage and looked so cool. I went to watch Crying Nut play a concert in Seoul. It was my first time experiencing live music. It was such a great night. Watching them play live made me want to learn to play guitar and become a musician too.

Last year, you came to SXSW and the US for your first tour. What was the most surprising thing about your experience here?

Ju-Hyun: I was surprised by how many bands and people were at SXSW. The festival is so big! I read that there were around 2,000 bands from 60 countries last year. We were really surprised to see so many acts playing at the same time all over downtown Austin.

Your friends, Apollo 18 had fun trying new foods here last year. Are you looking forward to anything in particular about the US, yourselves?

Ju-Hyun: Most of our shows on this tour are in Texas. I really want to meet a cowboy while we’re there.

Lastly, there are a lot of Korean bands featured at SXSW this year. Do you think the world is opening up to the Korean rock scene more and more?

Jong-Hyun: Korean bands are starting to get a bit more recognition outside of Korea, which is great to see. Hopefully more and more people start paying attention to all the talented musicians we have here. 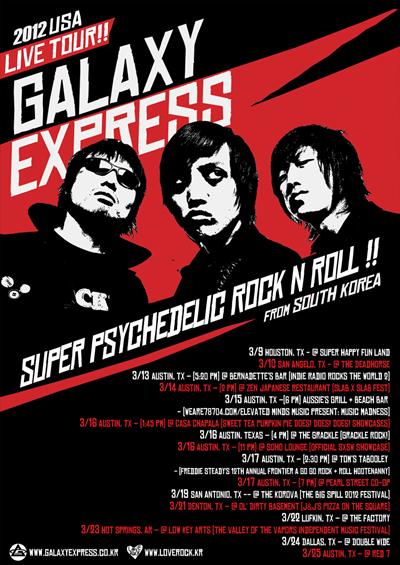 Don’t miss Galaxy Express performing all over Texas this month!