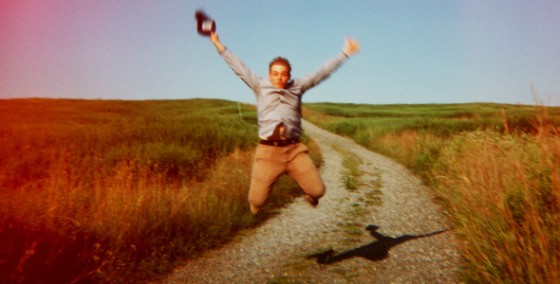 The Lost Shores, the musical brainchild of Richard Aufrichtig, was brought to my attention by a friend of mine sometime in the beginning of November.

So far, The Lost Shores have released a few EPs and an LP entitled Green Leaves, all available as digital downloads from the Official Site. The music itself posseses a sound capable of evoking a range of memories, bringing to mind images of summer reluctantly giving way to autumn.

The first time I set foot in Brooklyn was the same night that I went to see The Lost Shores perform at Pete’s Candy Store. We were running a little late, arriving shortly after the show began so we took seats at the back of the room. The venue itself was incredibly cozy. It felt like a decked out subway car in shape and the lighting was reminiscent of a theater space and it was more than perfect for the intimacy of the performance.

I was beyond impressed with Aufrichtig’s style. The atmosphere was interactive with short bouts of conversation between songs and his presence was both captivating and endearing. Before playing a new song, Richard held up title cards with the name of each song in stenciled letters on them. There was a warmth in the room that all but made up for the bleakness outdoors and I welcomed the contrast.

The audience was very friendly; there were lots of smiles and soft giggling when jokes were made. Aufrichtig is reluctant to play covers. However, in honor of his older sister’s birthday, he covered a Bob Dylan song and reaffirmed the radiating sense of inclusion unique to his performance and uncharacteristic of the generally cliquey indie/folksy scene that Brooklyn is known for.

When we started running out of space inside the room, Richard invited some of the people to sit on the floor. It reminded me of a group of friends sitting around a bonfire and for a while I was all warm and fuzzy inside.

After the show, we all sat behind the venue in a sort of garden area talking about Richard’s time as an NYU Tisch student and various other music related things. I was very excited to speak to the man behind the music and he was very sweet and quite funny. He interviewed me a bit about my own background and I found it amusingly ironic as I should have probably taken the time to ask questions myself, but my common sense caught up with me after I returned to Manhattan.

If you met him, you would probably get sidetracked as well. He has a smile that’s capable of melting any heart, whether it’s made of muscle tissue or stainless steel, like mine, which is certainly a plus for any up and coming artist.

The performance was truly beautiful and it was a delight to allow myself to be carried away by the sounds and whims of The Lost Shores.  A few of my favorites are I’ll Surround You, Highways and Stars and Island. Following his performance, I emailed him a few questions about the project.