Since then I’ve been following Sen through social media and got the chance to communicate with her through Weibo. So I asked her if she could take some time from her busy schedule to answer some questions. After some back and forth, here are the results~ 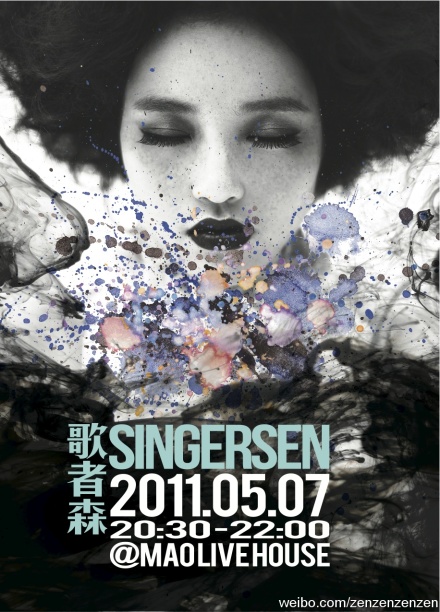 Hi, Amy. First of all, I want to express that I’m very happy to be able to gain the approval and support of YAM Magazine. This made me so happy that I even flipped my hair, although you can’t see it. I want to especially thank you for giving me such strong support — Thank you.

I have just begun doing my own music, and to be able to receive your affirmation and encouragement makes me very happy. It’s a very good encouragement for me.

It’s my pleasure to be able to listen to your music and to have discovered you at such an early stage of your career. Though, I read that you started singing very early, when you were 4-years-old or so. Did you grow up surrounded by music? Is anyone in your family a musician?

Yes. I begun performing when I was 4. It was probably because I was so loud when I cried that my teacher, who first found me, was interested. I don’t have anyone in the family who’s doing music, but I think my musical talents was probably influenced by my dad.

He doesn’t know how to sing, but he’s somewhat of a self-taught genius and learned seven types of Chinese instruments by himself. He can also listen to the music on the radio and then write down the song’s score. He learned everything by himself . He’s very impressive and has always been my hero

When I was little, I remember I was the star in preschool, all of the teachers and kids really liked me because I could sing well. However, after going to school, I suddenly started stuttering and grew lots of freckles, so I became very shy and reserved, hiding all of my imagination and dreams into my own bedroom.

Often, I would hide in my little room, put my mom’s clothes and the lipstick I bought with my spare money, and sing all my favorite songs with a flashlight as a microphone. Strangely, I never stuttered when I sung (laughs). Whenever someone knocked, I would immediately wipe of the lipstick and pretend nothing happened.

I also liked to play by myself and would imagine all sorts of things, which would make me feel special — I liked that. I love dreaming, dreaming in the daylight, and I think that’s why my songs often give people an imagined world or a feeling of leaving reality.

I think that comes with growing up as an only child. I used to dress up as Michael Jackson in Remember the Time [MV] when no one was home (laughs).