Your music has been taking a very interesting journey, it’s been evolving and adapting with each album, it’s easy to see you grow as musicians. What are some styles you’d be interested in learning about and maybe adapting to make your own?

Well, it depends. There is nothing that is already planned. Magical moments happen each time we work on an album, strongly directing everyone in the crew to one ultimate destination. The magic makes us get attracted to certain styles or culture and makes us focus on developing them into our own expression. I think we are very lucky to have this kind of moments. 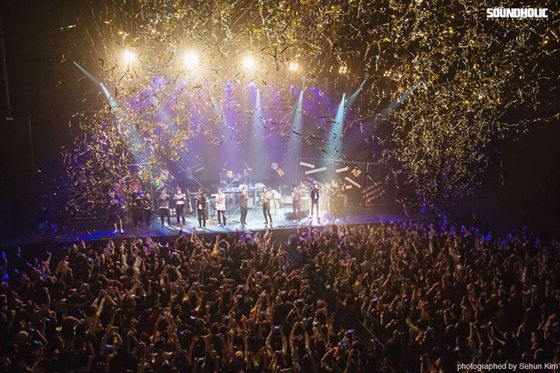 For your New Years Eve show you had some great visuals going on while you performed, can you talk a bit about the creative process that went into that? (And is there any chance that set is coming with you to the US?)

We always discuss a lot with our visual artists before even starting to write songs for the album. We try to have clear visual ideas for the album and for our shows. Visual elements are very important in all of our works. (Unfortunately, we will not be able to show everything during this year’s N.American tour)

I’ve been following the Korean indie and rock scene for about 8 years now, and I’ve seen a significant increase in interest in that side of the Korean music, at least as a foreign fan in the last 3 years. Do you see that as a musician as well? Are the amount of Koreans interested in independent musicians on the rise as well?

Yes. The whole Korean music scene has grown. Starting from the Korean Pop scene, now people started to show interest in the indie scene. Also, we can see that there are a lot of new bands every year in the scene, and most of them are very talented. We think it’s a very natural phenomena.