Then Cinescape happened. Back in high school, I had the hugest crush on my dear Bruno Pinasco, who since his humble days of talking about movies for little pay has become a Peruvian entertainment guru — if Bruno Pinasco and Raul Romero [1] were one Korean person, they’d be Yoo Jaesuk.

According to my behind the scene pals, his show is seen by so many people that whenever something gets mentioned on Cinescape, interest peaks no matter what it is about. Then Pinasco did a short Kpop special.

Turns out that Pinasco asked Peruvian Kpop fans on Twitter not long ago what it is about Kpop that they like so much.

Of course, if you ask pop music fans what they like about their pop music stars, you’re never gonna get the word “production value” in the process unless you’re talking to someone like LinzerDinzerTV. In the end, Pinasco’s brief back and forth with Peruvian Kpop fans seemed rather lukewarm. But whether or not Bruno Pinasco believes one can enjoy pop music despite the language, it has little to do with fans who are working their butts off to make Kpop happen in a venue near them.

Big Bang’s Global Event — voting on Facebook — currently has over 280k votes coming from Peru, ahead of Brazil’s 250ks, and the United States almost 55k votes. I was even a little bit perplexed at that. 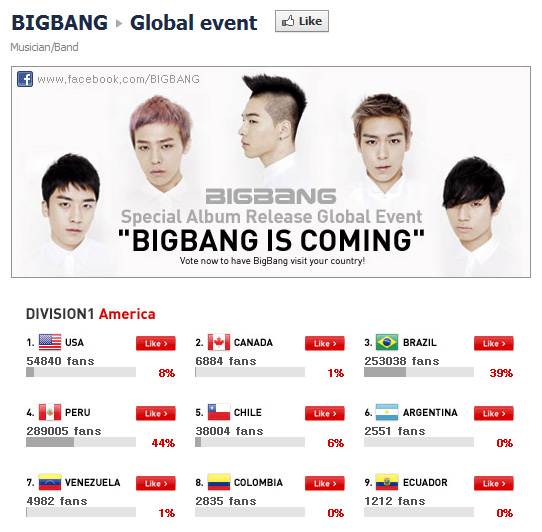 In the meantime, Peruvian fans of S.M. Entertainment’s idols’  keep lobbying for SMTown Peru (currently at a little over 18k Likes on Facebook), to be able to enjoy their favorite idols in the flesh — just like the people attending SMTown New York and SMTown Paris did.