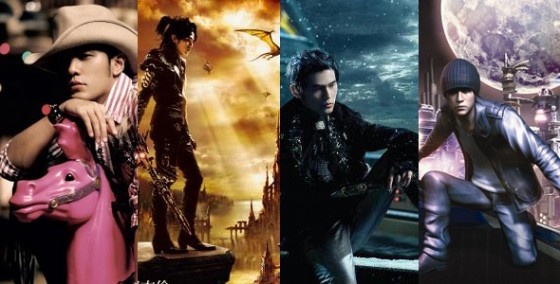 In theory, we should feel “blessed” for having an artist that is willing to explore as varied genres as country and hip-hop. Yet, I’ve never felt that way. His ideas seem all over the place when it comes to picking a direction for the album, despite having a clear view when it comes to his image — he also works as an image consultant for others.

I am of the opinion that Jay is so versatile that he doesn’t know how to focus his own work. He likes to do so many things at the same time that he ends up hurting his own album-making in the process.

If we take a brief look at his discography during his Alfa Music days, he seemed to be a lot more consistent than he is now. For example, his albums Fantasy (范特西) and Eight Dimensions (八度空間) contain tracks between pop ballads, some R&B, and some pop rock completing the concepts with album covers representing the style of the albums in a clear way [1] [2].

From Ye Hu Mei (葉惠美), and going through Common Jasmine Orange (七里香), November’s Chopin (十一月的蕭邦) and Still Fantasy, we seem to get a Chou that fuses different elements from pop and rock with classical music and a slight more prominent Chinese style. However, since those days, we seem to get off-side tracks like the ping pong R&B Year Three, Class Two (三年二班) [MV], the hippity hop Checkmate (將軍) [MV], the gangsta Reverse Scale (逆鱗) [MV] or his first test with a more country influence in Maltose (麥芽糖) [MV]… and of course the lullaby rap Listen to Mother’s Words (聽媽媽的話) linked on the first page of this post.

It is during his On the Run (我很忙) days when he launches his first album under JVR Music that things start getting out of control. Jay Chou with cowboy hat, pink pony and all might have seemed like going into a country direction, but he only does it halfway through with tracks like Sunshine Homeboy (陽光宅男) [MV] and fully on the obvious Cowboy on the Run (牛仔很忙) [MV]. Wouldn’t he have needed to commit to the country style when the cover and title of his album required it?

In Capricorn (魔杰座), Jay Chou launched his new image surrounding illusion and magic — the cover of the album looking a lot like fantasy rock, well exemplified in the rockier Dragon Rider (龍戰騎士) [MV]. Yet, the main tracks of the album became the pop ballads Give me the Time of a Song (給我一首歌的時間) [MV], Promised Happiness (說好的幸福呢) [MV] and Ocean of Flowers (花海) [MV], the yodelling honky-tonk Mr. Magic (魔術先生) [MV], and the folksy pop song about happy rural life, Rice Aroma (稻香).

There’s definitely a clash in concept, style and image there, and as an image consultant, Chou should have realized this sooner.