Interpol: From the little I got to hear of them live, I regret not being able to listen to their entire live set. Walking from the Hipódromo de San Isidro’s principal entrance towards the scenarios is a long walk and we got in when PDA began. My friends wanted to go to the Miller zone and catch some beers, but the line was so freaking large, we straight up headed towards Interpol playing Not Even Jail and then finishing their concert with All The Rage Back Home (from their latest album El Pintor, for which they’re still touring) and Slow Hands. Really glad to at least witness a few minutes of them live. Crowd was accesible to walk through to get them, but then we walked to the other side of the venue for the next act. Someday, I will see an entire gig of them live. I owe that to myself.

The Kooks: There was a 20-30 minute crowd delay for them to appear on stage. Actually, almost every act on Day 1 suffered from delays because of the event’s online live streaming scheduling (Day 2 didn’t suffer from this that badly) and this benefitted us to a certain extent because we would have missed out on Interpol otherwise. Anyways, here’s two pictures I’ll share because they will come into play later on for storytelling purposes. 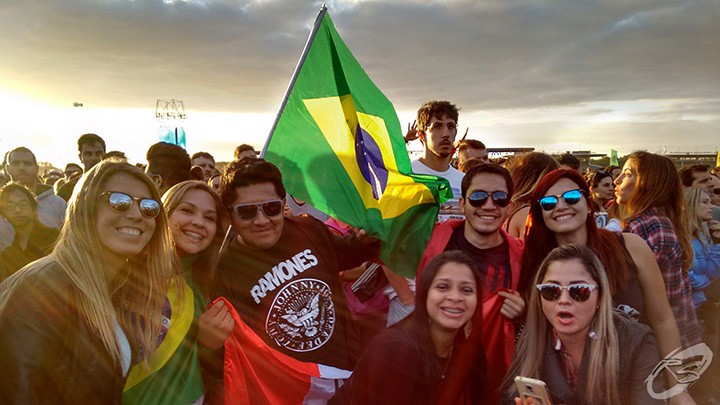 The highlight of my friends’ lives. LOL.

Argentina vs Brazil will always be a major debate, whetever it is football, women, cities, etc. I took the picture for my friends and then for the other girl, but I didn’t got my picture with them (but I’d like to meet the redhead girl someday — sadly, idiotic me never asked anyone for their Facebook accounts or emails for some odd reason), but I did got to meet them again twice on Day 2.

First, the blonde with the mobile at the train station recognized me and shouted “Peru!” and we all tagged along in the train and they stamped on my Manu Chao t-shirt a Brazil flag sticker near my left shoulder. They were drinking their self-made caipirinhas and beer cans on the ride to San Isidro and told me they left Day 1 before Calvin Harris started (at 11:00PM, the train station stops working) and a taxi ride was expensive for their budgets, yet they would stay for Skrillex no matter what. The girls were pretty fun and cool people, they even danced samba while riding the train with other concertgoers from different countries and 3 other Brazilian dudes. Also, some jackass in the train chanted “Brasil, Decíme Que Se Siente”, [it started last year and it’s catchy as hell] which made me chuckle a bit, but the gals no-sold the chant. Bravo.

On the line for the show, I lost sight of them when the lines got split into genders. My friend who lives in Buenos Aires met them twice at the electronic stage and said that they weren’t people that you could simply grab and fuck with, as he told me when some old douchebag tried to grope them. The second time happened after exiting the venue, but they were 4 instead of 5 and they took a cab on their on. Hopefully, they didn’t suffer the same shit I did on Day 1. I took a van with some 20 other folks, one girl saying to the driver and his pal in a friendly “you’re already fucking us in the ass with your prices”. Everyone lol’d.

One of my friends actually added one of the Brazilian girls on Facebook, and she accepted. A few days later, she deleted him. LOL. 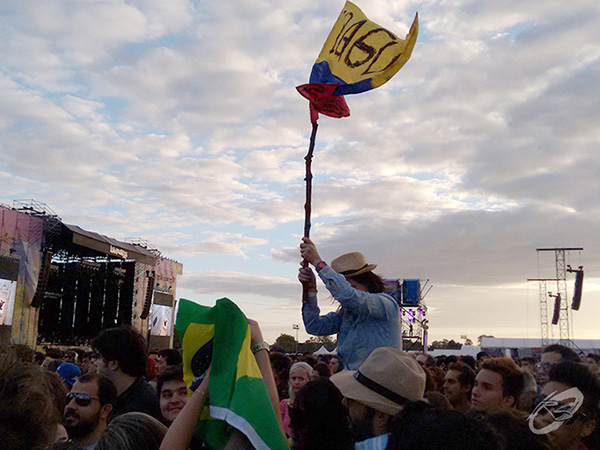 The girl with the Colombia flag from Ibague. Below Ibague, it also says “Rio de Janeiro”. The Brazilian girls stamped their marks on that flag.

At the same time, my friends, the Brazilian girls and I were also close to the Colombian folks. The girl in the picture (and another Colombian) will come into play later on.

As far as The Kooks are concerned, they sounded pretty much like Arctic Monkeys going full-blown pop band, but they do have very catchy songs on the ears — Ooh La, Bad Habit and Junk Of The Heart (Happy) are easy standout songs from them — and they’re girly-friendly IMO. Three songs before they wrapped things up, my friends and I switched to the other stage to wait for Foster The People.

Robert Plant: Yup, the Led Zeppelin singer. A living legend that didn’t made it to my Top 5 because midway through his concert, my friends were hungry and decided to head towards the food stands. That is definitely a dick move considering who Plant is, but we were pretty thirsty so we headed towards the drink and food stands. 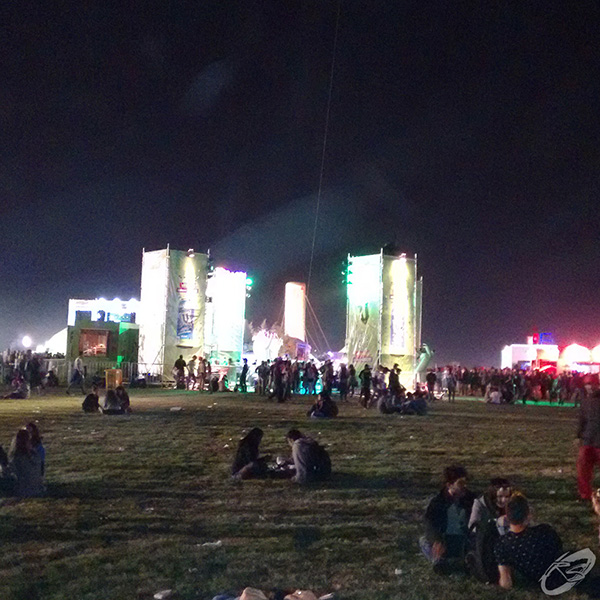 At some point, people are dead ass tired from attending a festival as you can see.

Plant’s intro song was great enough to counter Foster The People’s gig and I got to listen to Black Dog live, so that was cool. The sound of Plant and his band was pretty damn great, though. Crowd reaction towards him grew stronger and stronger with time. Even at the food stands located far from the stages the reactions from Plant’s fans were heard loud and clear, especially with the ending involving I Just Want to Make Love to You, Whole Lotta Love, Who Do You Love and Rock and Roll, the latter getting the strongest crowd reaction. Some might say that Plant was the best act of the festival and I can understand. However, there’s a moment involving Plant in Lollapalooza Argentina 2015 that I enjoyed much more than his concert (from what I saw with my own eyes), but I’ll bring that up later.

Robin Schulz: Got to hear a little bit of his act (it was alright) while eating a sandwich and drinking a bottle of water. He was eclipsed by Plant’s sound, I’ll say that much. Near the end of both Plant and Schulz’s acts, my friend who lives in Argentina decided to head towards the electronic stage to hear Nicky Romero live and my other friend tagged along with him. At that point, we split paths and decided to meet again just before Calvin Harris played on stage because there was no fucking way I’d miss out on Jack White, who is the reason why I travelled to Buenos Aires and scheduled the vacations around the possibility of attending one of the Lollapalooza shows in South America. Argentina was the cheapest option.

Calvin Harris: The headliner for Day 1. I’ll say that I’m not a fan of electronic music by any means, but Harris made most of the crowd happy while I felt that Jack White should have closed Day 1 instead. I still enjoyed the ending for what it was. Lots of pyro shots here and there to get the crowd pumped and dance their asses off along with multiple use of lights, but I ended up wondering about other things instead. 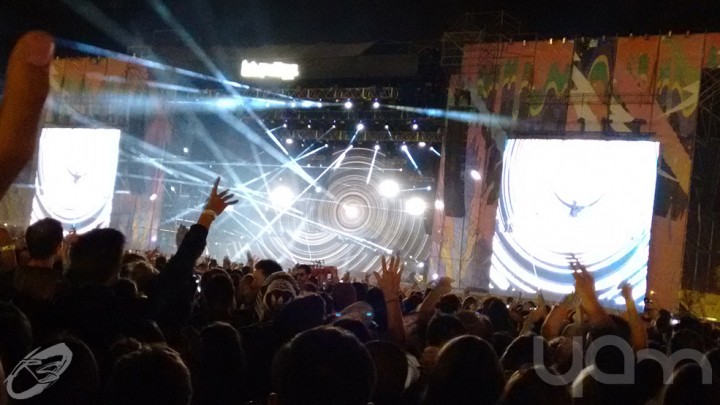 I can’t remember the exact moment this picture happened, but it’s a cool shot nonetheless.

One of my favorite moments during the concert was seeing everyone moving their hands side-to-side at the rhythm of the sound of a tick-tock clock 3/4 into the gig. Summer was a nice song choice to end the gig alongside the loads of pyro shots. 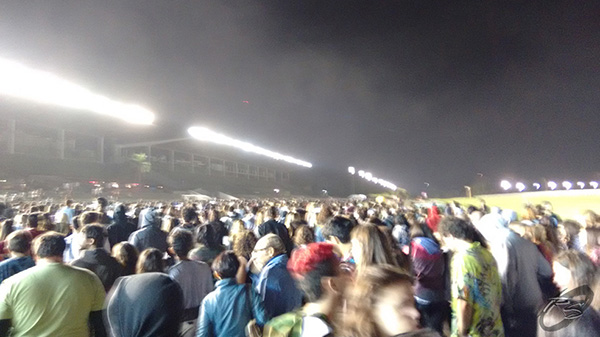 Shortly after making it out of the Hipódromo, one of my friends (the non-white dude) and I tagged along with two Brazilian girls (not the ones we met at The Kooks’ gig) and shared a taxi ride back to the Obelisco since out respective hotels were located there. That taxi ride proved to me that Argentina taxi drivers are the fucking worst… that is until Peruvian taxi drivers get to use taximeters. He wanted to charge us double just so he could return back to his original work zone (San Isidro). I really hope he crashed his car and died. LOL.