Imagine me, listening to SingerSen, minding my own business when Amy passes me along the Soundcloud for a Shanghai-based rock band that sings in English. Needless to say, I was intrigued, if not a bit wary. I mean, who would expect a group of Westerners to impact the Chinese rock market as thoroughly as Dan Shapiro and his Fever Machine? What I encountered, however, was nothing short of mind blasting.

Indeed, The Fever Machine is a group that’s hot, full of something akin to tightly wound sexual tension. Literally, upon hearing the opening chords of any of their songs, you find yourself transported into a different dimension, the sound breaking through space-time as if the very principle itself didn’t exist. Yet again I’ve found myself in awe of the ever-expanding scope of the universe. At this end of it, I’ve encountered a lewd and lovely group of rockers that is taking the genre to new levels of epic. 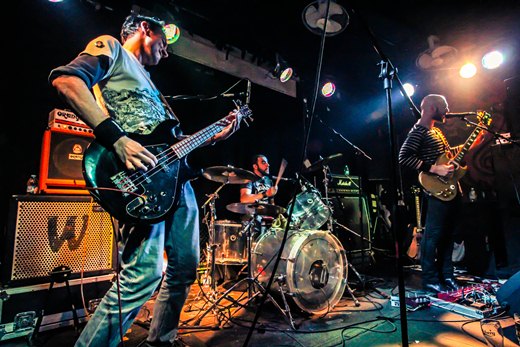 Well, for all those in the YAMmie Universe who don’t know you, I’d like to start off with an introduction. If you had to give yourself a 15-second promo, what would it sound like?

We’re a heavy, psychedelic rock trio – stoner rock – and we just released our new 7” La Chupacabra on vinyl and digital on Genjing Records.

How’d you end up in Shanghai?

DS: Honestly, no particular reason, and for all three of us the move to Shanghai happened at different times, so there’s no single way to answer. For me, my band in San Francisco dissolved and I wanted to travel a bit, see something different. The original plan was to check out China for six months. Now it’s been six and a half years.

With the little background information I gleaned from interviews and their official website, I set about trying to get a better grasp on who they were and what their sound stemmed from.

The first song I heard from you guys was Hell Yeah. My entire universe sort of shifted a little bit. I sort of thought Aerosmith-meets-Lush. How would you describe your sound in your own way? It doesn’t have to be with terms everyone already knows… or even that exist. Just go for it.

DS: That’s not the first time someone has commented on Hell Yeah sounding a bit like Aerosmith; I’ll take that as a compliment. I’m really not into what they’ve been doing for the last 15 years or so, but the first four Aerosmith albums are some of the best hard rock records ever made.

For a while we were going with “epic, schizo rock” to describe our sound, since our songs were really all over the place and we were building that stoner epic quality with tracks like Synesthesia and Don Pedro. But that description didn’t seem to really satisfy a lot of inquiries, so really we’re just a heavy, psychedelic power trio with elements of rock, doom, stoner, metal, and punk.