Now, for a few words with the drummer; Jae-Hyuck Choi: 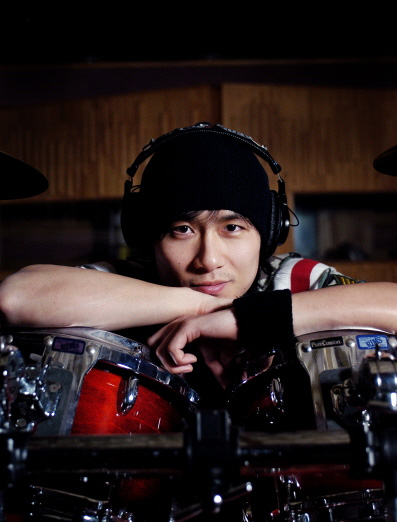 First of all, I have to commend you on your English, how is it that you know it so well?
Well, thanks for saying that, but I don’t suppose my english is that good.  I’m always interested in learning foreign languages

How long have you been playing drums? Is it what you always wanted to do?
Since when I was freshman, 19 years old. I think I was a late starter compared to other drummers. I started it almost by chance. I was kind of a replacement, and when I finished the army service in 1997, I joined Deli Spice as a full time member.

What are your musical influences? Also, what are you listening to now?
Various! I should say that the biggest influence of my music is my daddy. He was a records collector, so it was a very natural thing to me listening those oldish, but timeless music such as ABBA, Alan Parsons Project, James Last Band, etc. These days it’s a Christmas season so Michael Buble was in my ears today!

What is the hardest challenge of being a band and garnering fan interest?
Well, the first one could be committed to one another, that makes great tunes, great shows and other related works. I believe that when we are on high conditions, and quality sort of passion, the audience will naturally feel and enjoy it.

I like that no one stands out as a clear leader from the three of you, you’re all really equally present in your promotions. Is there a band leader or is everything a collaborative effort?
Good question. That’s me! Because I’m the elder one. That’s only the reason. Well, we are like triangle. I mean we three are equally important as long as our band goes. And the theme of our conversation is RESPECT. And that’s what we’ve been doing with one another.

I know all of you are members of other bands, is activity with them on hold, or are you active with them all at the same time?
It’s kind of an infinite vacation. So at this moment, Yellow Monsters is the most important thing we are all in, so we don’t really think about any other things.

What was the last concert you attended that wasn’t your own?
ARIP’s gig. She’s a folky songstress and also our bass player, Jinyoung’s girlfriend!

What is your favorite venue to play in, and why?
Sangsangmadang(상상마당), Hongdae. Well, we don’t really mind about size or equipments as long as there is Marshall JCM900 or JCM2000. That’s what Yongwon wants.

If you could collaborate with any band or performer, who would it be, why?
Noisecat! I played whole songs on Morning Lights, his 2nd LP,  and I want to do that kind of thing again with him. He makes such a beautiful noise!

How did the Yellow Monsters come to be? Did you three know one another for a long time before forming the band? What inspired you three to come together?
We knew one another for a while but we didn’t really do musical works together. One day, Yongwon called me and Jinyoung to asked us to do some musical works together rather than have boring breaks. The next day, we just started playing together. Simple isn’t it? We also found that we were hungry for live shows. I mean the real shows! Do you know what I mean? The shows that are not only for the money!

My favorite track on the album is Christie, it has such a great range! Do you have a favorite track, either lyrically or one that you just think is fun to perform?
Destruction. The 1st track. It was the first song we play together and I can say it’s sort of landmark of ours.

Did the Yellow Monsters album take awhile to create? Can we expect another album from you guys in the future?
Well, it’s less than a month. It was magical moments. We already have tunes that could fill the LP and they are better than 1st LP as far as I’m concern.

Do you have a message for your English speaking fans?
Merry Christmas! I want you to enjoy the music we make. See you in venues.