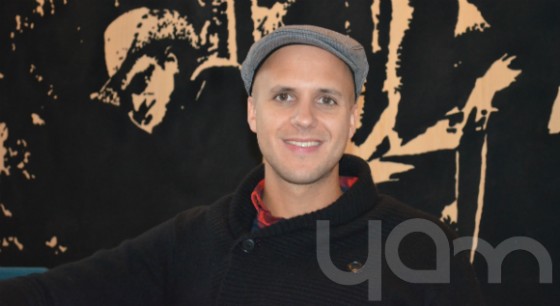 I was running late, so I got into a cab and prayed I wasn’t going to be too late. This being the second interview I am doing with a well-known artist, I wanted to leave a good impression. I arrived to the Universal Sweden office two minutes late, but thankfully Milow, the artist I was interviewing, hadn’t arrived yet. So I was given the exclusive Swedish interview. (Yes!)

This was less an interview and more a conversation between two people. So far one of the more interesting interviews I have done this year and one I will never forget. Milow was that fun to talk to.

I will be honest with you here. I didn’t have a clue that you had a new album out.

With the success that you had with Ayo Technology – here in Sweden it was impossible not to hear it everywhere. So after that, of course, I knew about you, but I didn’t keep up with what you were doing. So when they asked me if I wanted to interview you, I accepted out of curiosity. It was then that I listened to North And South and I completely fell in love with it.

It was love at first listen. Like knee-deep, all the way to the moon, crazy in love.

There’s something about when you listen to an artist and you go at it completely blank, without any hopes or expectations, nothing, just to see what there is. I listened to the album three times in a row. It was really well balanced and the perfect background music — since I was doing my research about you whilst listening to the album. I was pleasantly surprised and it made me look forward to your concert.

That’s really great. Except for the phenomenal things that happened with Ayo Technology, especially here [in Sweden], there hasn’t been much follow-up. I did three concerts in Sweden two years ago — a free concert in Stockholm and then Gothenburg and Malmö. But tonight’s going to be an intimate concert, so I’m going to present the new songs and try to convince more people.

It’s kind of a curse and a blessing, a song like Ayo Technology. It’s the kind of success that is once in a lifetime. A lot of musicians wait their entire lives for something like that to happen. I’m glad that it happened kind of late in my career. I had been making music and I was known in Belgium already. But when it happened, all of a sudden the doors to all of Europe were cracked open.

Yeah. What I tried to do is just grab the moment, try to enjoy it as much as I could — knowing that this was exceptional and might never come back. But at the same time I wanted to not enjoy it too much because I wanted to focus. I just tried to do things my way and just ensure myself that I can be one of those that keeps coming back and have my following. What I like about this life, about the cliché of waking up in a different city, is that it keeps me on my toes and it keeps me inspired. As a musician, you create not just songs or lyrics, but ideas in general. You get all these impulses. Creating stuff becomes easy because you have so much to choose from to write songs about. I love this.

Talking about creating – you said that with this album you wanted to write the best songs you’ve ever written. When do you know when a song is good?

Well, of course, there’s the search to write the perfect song and every artist will say you’ll never get there. You can say that this is pretty close or this is maybe one of the best things I’ve done so far but you can never really get there. And that’s good because otherwise, I mean, why keep going on? First of all, it’s instinct and it’s very important because you are the most important judge for your songs. Nowadays, you just can’t expect other people to raise the bar for you; you have to do it yourself.

I think I tried out almost all of the new songs before recording them and it was a luxury that I didn’t have with my previous work since I just hadn’t had concerts before that. I’m really proud of this album! I know it’s cliché and all when people say, “This is my best album.” But, for me, this is sort of the album that I wanted to make.

When you say that you “tried out the new songs before recording them” what do you mean?

While touring, I could literally collect first impressions of the new songs. I could stand on stage and say, “This is a new song I have prepared for you guys”. I was just collecting reactions. Of course, you have to be careful there too because a friendly crowd will maybe cheer even if you play the crappiest song in the world. They can still be like, “Yay!” So you have to make a distinction between a cheer and a louder cheer. I tried out a lot of new songs that I didn’t put on the album and it’s not that they threw tomatoes at my head, but it was like this is not as good or this is not finished.

A long time before radios, even in Belgium, before they started playing my music, I was using the internet just to share my songs. This is why my Facebook page has become so powerful. There’s almost 300,000 fans that I communicate with. You know, labels and marketing people tell you that you have to target your messages only for friends, but for me this is not a marketing tool. For me, it’s sharing my day-to-day life as a musician with other people. So when I post, “Tomorrow morning I’ll be in Stockholm for a concert,” I just want people to follow up and show a little bit of what happens behind the scenes.