Let’s talk about you musical history. You started off as a grunge fan, listening to Nirvana and Radiohead, am I right?

Yeah, I was into that first, but Nirvana wasn’t really my first choice. I didn’t take them as serious as I did Radiohead, in terms of inspiration. Radiohead always tried to make it more serious as well and cleverer, while Nirvana is just pure expression and Radiohead was more soul and rock type of music. But other types of music that hit the ground for me was punk music. A lot of that music was around me at the time. That’s all that I knew at the time, so I listened to it. 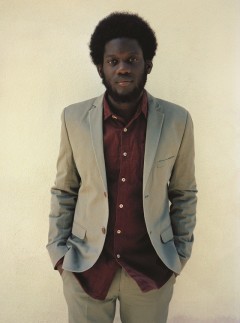 I have to say, I started off as a grunge fan as well. The first album I ever bought was a Pearl Jam record.

Oh yeah?! Which one?

Ten. And it’s still the best album I have at home.

Yeah. That was one of my fist albums of Pearl Jam as well. It is a good album Ten. Eddy Vedder is a good singer and the guitars are really good!

But still, how do you get from being a grunge lover and a rocker, to playing soul music?

I don’t think I really changed. What I liked about those artists I still like now. And that’s the same thing about soul music. Rock and roll has that human grit to it. The way that I pragmatically changed was that people showed me more music as I got older because there weren’t that many records at the house when I was younger. And a friend from back home showed me an album with soul music and that reminded me of the good stuff that’s in Kurt Cobain or Eddy Vedder or whatever.

So there is a connection between them you say?

Yeah! For me there is. But soul music just felt closer to me as a human being and more natural to me. It’s like, I really like what Kurt Cobain was doing, but I’m never going to scream down a microphone like he did. There is nothing wrong with that, but I would never do it. So when I heard the soul music I felt that this is the way I really want to express myself.

Are you able to infuse your music today from your early rock years?

Yeah, with mainly the guitar, playing that with the energy that rock music gave me, and my music, its progressive in a sense, in a way. I mean, Hendricks is still an influence of mine and I’m still into that music, so… yeah. Those blues phrases that he plays are pretty close to my kind of music, like the same way I hear Marvin Gaye music and their guitar, which is pretty close to Curtis Mayfield and his sound. Many people link me with Bill Withers because we sound alike, but I feel that I’m linked with Hendricks also.