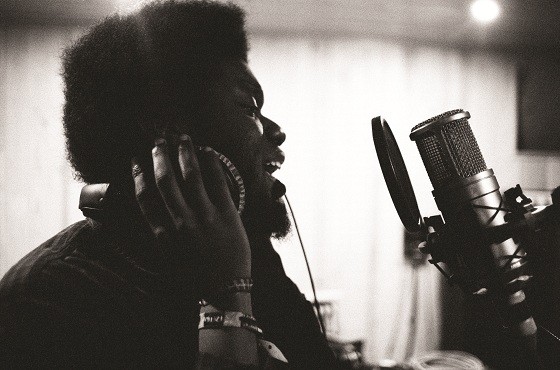 The new rising soul legend, Michael Kiwanuka, is currently on tour promoting his new album Home Again. Critics all around the world have been amazed by the talent this 24-year-old has. YAM Magazine got a chance to see him as he played in Stockholm on this sunny spring day. Since not much is known about this young British soul talent, I was eager to find out all about him and why he started with soul music.

It seems like most of the music journalists worldwide are still a little dazed and confused, or shocked maybe, by your talent and how fast you have risen in popularity. Are you a bit shocked as well?

Ehm, I haven’t paid too much attention. There is actually not that much time to stop and see it because you are always moving around from place to place, from countries from gig to gig, so you don’t sit and consider it. The only time I ever stopped to think about it was in Paris, some weeks ago I think, it was going pretty good there, we did some TV programs and we did some shots before the release and there was a lot of buzz around that and that gave me some time to feel the situation, but most of the time you are in your own little world… and that’s probably the best way.

Yeah, probably. But the wave you are riding on, are you ever afraid that it will crash and burn, so to say?

Yeah, I hope I don’t crash and burn.

Have you set up goals for your career or are you just taking the days one by one?

I think, maybe day by day really. It’s such a fickle business that it is hard to make any types of plans. I mean, you can still make up plans on what type of music you want to play but that’s as far as you can go. And you push yourself and try to be the best you can make. In terms of goals, in terms of record sales or being on the charts or being able to make an album that sells this much or this and have your songs on the radio, it’s hard to say because the business is too fickle you know, so I just take it day by day. One minute people are really interested in you and the next day they are really not. So enjoying the buzz right now is probably the best.

Yeah, that is probably the most rational thing to do as an artist or musician.

Yeah, because you can get quite into all the frenzy and enjoy all the fame or whatever might come with it, but for me it is the music that I love, and the guitar, and trying to make me interesting and say something, is what I want to do. So that’s probably the goal — to keep making music that challenges the mind, is artistic and creates a mood and color, all that kind of stuff.

When you try to find information about you, often you just find assumptions and opinions about who you are trying to sound like. But tell me, who is Michael Kiwanuka? Describe him to me like I was a personal ad.

[Laugh] Yeah I guess, I would say pretty laid back, music lover… ehm… yeah, that will do it.

A laid back music lover pretty much then?

Yeah, Im always trying to be as peaceful as possible, you know. It’s very simple.