I’ve been really enjoying the sounds of California-based electronic rock/glitch/pop band, IAMMEDIC for awhile now, and I decided to contact them for an interview. Their lyrics are deep and poignant, the beats are addictive and catchy, and best of all – the band members are amazingly humble. I mean, they even have a phone number available so you can call them. Just very connected to their fans, and I admire that a lot.

I recently got a chance to talk with the band’s leader, Enik Lin and get to know about one of my newer favorite bands. 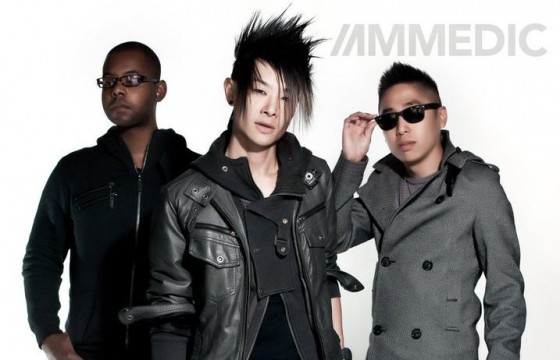 First of all would you mind giving us an introduction to the band? Who are the members and how did this project get started?
IAMMEDIC consists of myself (Enik Lin), and two of my best friends Danny Parke and Andre Harris. I originally started this project just as a way to relieve my creative anxiety after I decided to end  my last band Burning Tree Project.

It was originally just a solo project. I was at a point in my life that I wanted to focus on family but due to some very tragic events in my life, I turned to it full time in order to put my heart at ease and keep my mind from holding me down at a very low point in my life. My two best friends, Danny and Andre, stood by my side and IAMMEDIC became a full band.

Where did the name IAMMEDIC come from? What does it mean to you guys?
The name actually has a lot to do with our ideals and our belief in God. We’re not a religious group, but as I explained in an earlier answer, I’ve been dealing with a series of tragic events in my life and it really made me realize that I was defeated as a human being.

I felt sick and to me, God is the only doctor that can heal me. The IAM in IAMMEDIC means God from the NIV bible. So I guess our band name just means, that we’re sick and God is our doctor.

I have to say that off your first EP, The Tale of Abigale Withers, one song won’t leave my head, Unexplained. The lyrics are very poignant, who was the lyricist for this song?
I wrote all the lyrics and music for that record. That record is actually very personal to me.

I know you have a new EP coming out, can we expect the same sound as the last album, or have you mixed it up a little?
You know, the thing with us is that we write what we feel, and sometimes kids might not understand that. The only thing that we’ll stay true to is the electronics  for the most part. But I want to be able to express my feelings and creativity how I feel for the most part.

The new EP will definitely have some elements from the last record, but we’ll also have new elements. I think this time, since Andre joined up, we’ll include elements of rap/spoken word but we do it our way so it’s not gonna sound like some hip hop album. haha.

Do you have a release date planned for it?
We haven’t announced a formal date. It’s weird, we’re kind of playing it by ear, releasing one song at a time but all the songs will be released this month for the most part. We’re just doing it in waves and the greatest part is that we’re allowing our fans to choose the price…even free if they wish.

Music to us is art and art is in the eye of the beholder. Something that’s priceless to you could be worth jack shit to the guy next to you. If someone feels that our racks are worthless, well at least they got it for free. =)

What’s your creative process like? How long does a track take to put together?
I just go with what I feel. Sometimes I’ll knock out a completed track within 2 hrs mixed…. sometimes, days. We have tons of different rituals when we write but we get the best results when we just go with the flow.

Tell us, if you are willing, one album in your collection that might be a surprise for fans to know you own?
Haha, I don’t know if I have anything that might shock anyone. I never really gave two cents about how people felt about the music I listen to. I listen to indie rock, electronic, hardcore, folk, pop, K-Pop, J-Pop, C-Pop even sometimes country.

Yeah, I don’t think I have anything that would shock anyone, then again, I wouldn’t know if it would shock them or not. I don’t own a Justin Bieber album if that’s what you’re hinting of *laughs*. Although I got nothing but respect for that kid. He’s mad talented. People just be hating on him because they’ll never have that success.

Who are your musical influences? Or, what got you into music in the first place?
Well, both my parents are musicians. My mom is a piano/vocal teacher and my father used to sing opera. I have influential roots from everywhere. Beatles, Elvis, Michael Jackson, BT, Wutang Clan, Dr Luke, Bach, Mozart, Debussy, Seo Taiji, Underoath, Justice, Mstrkrft…Honestly though, when it comes to writing our music, I don’t think that I’m as influenced by other artists as I am with life.

Everything has a tune in my head. Every event, moment even minute…I hear it…I think that’s the one thing that sets us apart. I don’t think we really sound like any other artists per se.

Many bands want to simply “succeed”, what does success mean to you as a band?
Success to us as a band isn’t what most people would expect. It definitely isn’t the money. I quit my 80k/yr job as a Creative Director/Graphic Designer at an Elite Design agency to do the only thin that really made me happy…and the results are that I’m dirt poor and barely scraping by. At the end of the day, if I can survive, pay my bills, one day support my parents and eat doing this, then that’s success. I think the other main part of it, is just finding someone that is moved by what we write. Even one person.

What are your short and long term goals as a band?
Our long term goals are to be able to do this long term! *laughs*. Our short term goals right now are just to keep growing our fan base and spreading our name out there. We’re just taking it one day at a time. No use in planning for a future that no one can foretell.

Do you guys ever have creative disagreements? How do you work through them?
Of course, what band doesn’t? I think the number one thing that helps us work through our disagreements is our respect for each other as best friends. When I first started to work with them as a band, I told them about this book I was reading called  The Five Languages of Love.

The book talked about the different ways that people interpret, receive, and express love. That really helped me to see and understand how I needed to be treated and how they did as well. I spoke openly to them about it. I love those guys to death, and it feels great to know they feel the same and our respect for one another amazes me.

Our readers have a general bias towards K-Pop, and you guys did a re-mix of Deux’s 나를 돌아봐, does this mean you listen to Korean music? Anyone we might be familiar with?
Yeah, we listen to some K-Pop. Actually, I grew up listening to a lot of Seo Taiji, DJ DOC, H.O.T, *laughs*. I’m a big fan of what G-Dragon and YG are doing with their music. I love 2NE1. Danny probably listens to more K-Pop than I do. I do a lot more writing music than listening to it. *laughs*.

I have some very close friends that are in the K-Pop industry. One of them being Jae Chong formerly of the hit group SOLID and now owner/producer of Aziatix. Jae has been my close friend and mentor, so I’m always hearing news about the K-Pop World.

Any chance you’ll be visiting the mid-west soon? Maybe while touring after the EP release perhaps? I’m in Minneapolis, and would love the chance to see you guys live!
We plan to tour the entire US this summer, and then parts of Asia, so be expecting  us. =)

Lastly, I’m really impressed and happy to see how interactive you are with your fans, do you have anything special to say to the Paramedics?
Yes, we have the most awesome team of fans ever. So awesome, that we really consider them family. I don’t know how many artists can say that about their fans but we truly, deeply, care about and love our fans. Thank you guys for being so amazing and supporting us through every step of the way. Our Paramedics rock!

Check out IAMMEDIC on their many portals:
The Official Facebook Page is probably the most interactive and up-to-date way to learn about them.
The Official YouTube Channel is chalk full of music videos, random postings, and teasers for the band.
The Official Website IAMMEDIC.com is also informative too.
Buy The Tale of Abigale Withers on iTunes