Of all your accomplishments this year, what are you most proud of?

I’m most proud of our American tour. It took a long time and a lot of work to prepare for. It was also our first time doing a tour that long. We had a hard schedule there, but it was very exciting and we were really happy while we were there. All three of us felt really proud and that we had accomplished something when the tour finished.

Right after our American tour, we played two gigs in Tokyo before returning home to Korea.

Those shows happened only three weeks after the March 11 earthquake and tsunami in Japan. One of the clubs we played in was in the basement of a building and there were signs on the walls saying that shows would be cancelled if there was a big earthquake.

Our friends helped us to write a special message in Japanese to read during our set. It felt good to share a message of hope with our neighbors. 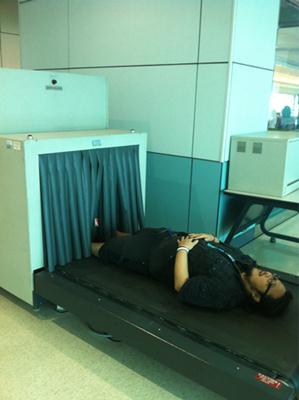 Daeinn takes a break while traveling.

It’s been a whirlwind of a year; have you guys gotten any time to relax? What is your favorite thing to do in between making great music?

Yes, we’ve had lots of time to relax. In fact, we’ve had too much time to relax! We hope to be even busier next year.  We like to hang out with our friends during our free time. We’ve got a lot of really talented friends and it’s always great to spend time talking and drinking with them.

My favorite domestic bands right now are Juck Juck Grunzie and 13 Steps. Juck Juck Grunzie are a female rock band in Seoul. They like to play noisy rock music and their sound is getting more psychedelic. 13 Steps are the best hardcore band in Korea. Dokyo’s vocals are great! He has handled vocals on our song Manic Depressive at some bigger Apollo 18 shows. We love having him as a special guest.

Nirvana is my all-time favorite band. They made me want to play rock music. I didn’t know who Kurt Cobain was until after he died. My friend had a music magazine with a story about Kurt Cobain in it. I asked who he was, and my friend said, “He’s a famous musician, but he’s dead now.” I asked my friend if he had any Nirvana CDs that I could listen to and he lent me a copy of Nevermind.

The first time I heard it I couldn’t understand what the big deal was about the band, but then I listened to the album again a few months later and it blew my mind. After that I became a really big Nirvana fan. I bought all their music. Then I bought a guitar and started to learn how to play rock music. Before hearing Nirvana I was into dance and techno music. Nirvana changed my musical outlook.

What’s a band that you think deserves more attention?

In Korea, there are many bands that deserve more attention. Juck Juck Grunzie, 13 Steps, National Pigeon Unity, and No. 1 Korean are all really good bands that people should check out. We played with a cool band at SXSW called Moja. They are a duo from Japan. People should listen to their stuff too.

Any last words for your international fans?

Please listen to Apollo 18. We hope you like our music. We want to tour all over the world, experience different cultures, and make lots of new friends. We want to play in your city one day. We hope we can meet you, talk with you, share drinks with you, and rock with you! 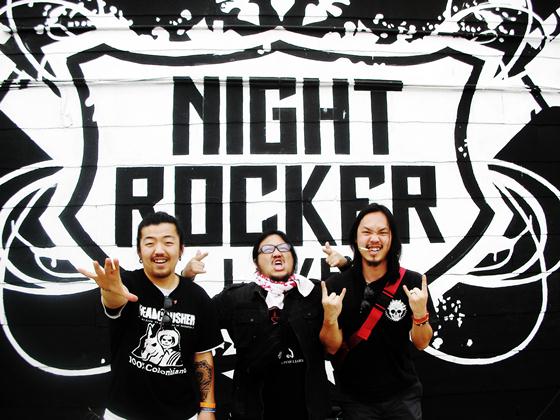