Apollo 18 is a South Korean rock band that started rocking in 2008 and have only been getting better and better as time passes by. They won last years’ Rookie of the Year award at the Korean Music Awards, but didn’t stop there. They’ve gone on to be one of the first Korean artists to play the annual SXSW Music Festival, and even toured across the southern United States.

Now, they’ve released their latest EP, Black, and they’ve generously agreed to give us an interview. Daeinn Kim, the bands’ bassist, took the reigns and answered the questions for the band. 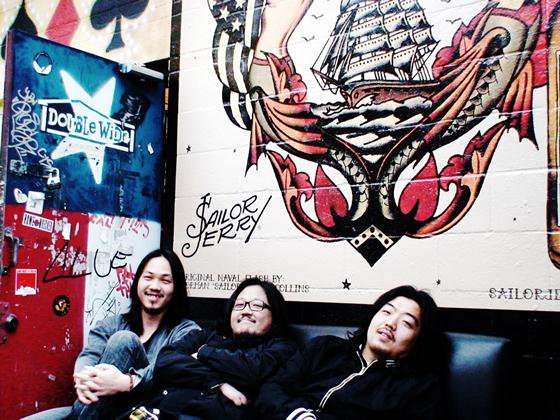 Since this will be YAM Magazine’s first interview with Apollo 18, will you please let us know who the members of Apollo 18 are?

There are three members in Apollo 18: My name is Daeinn Kim. I play the bass and sing. Hyunseok Choi plays the guitar and also sings. Sangyun Lee plays the drums. Sangyun is also usually our band’s driver. It’s a really important job to fill because it means Hyunseok and I can drink more at gigs! We’re always thankful for Sangyun’s hard work.

Where did the band name come from?

I chose the name, but Hyunseok unintentionally inspired it! Hyunseok was wearing a T-shirt one day that said “Aloha 76” on it. I read the T-shirt wrong and thought it said “Apollo 18.” I thought “Apollo 18” sounded really cool and would be a good name for a band, so I asked him and Sangyun about using it. They said any name was fine with them.

In Korea the name is a bit funny and strange to people because the Korean word for “18” sounds similar to the Korean version of the f-word.

What is the significance or meaning behind naming each album after a color? Do you keep a specific color in mind while writing songs for each album?

Red was recorded in the winter. It’s cold in the winter, so we chose Red as a title because thinking of the color red made us feel warm. Blue was recorded in the summer, which in Korea is very hot so we chose Blue because it reminded us a cool breeze and the beach. Violet was chosen because the color is a mix of red and blue, which were the titles we used for the CDs before it.

We chose Black for the title of our new EP because we like thinking about outer space. And, of course, outer space is black.

But actually, the colors aren’t so important to us. It’s just a name and a way to sort a collection of songs. Our original plan was to call the new EP Gogol. The cover art was going to be a photo of a blue sky and big white clouds that I took from the window of an airplane. But then we changed our mind and decided to go with another cover and name instead.

For Black, what was your biggest inspiration?

We wanted to make something more powerful and more sentimental than our previous recordings. We had just finished a tour that saw us playing 18 concerts in three weeks in the United States and Japan. We worked really hard during that tour and had many cool experiences. That tour made us want to be a better band.

SXSW and the rest of your tour this year was a big deal for you, any plans for a return to the United States?

We wanted to go to the United States again this past October. We talked about tour routes and possible places to play, but the cost was a bit of an issue, so we decided to focus on getting the Black EP released instead. We plan to do more international touring in 2012. We’d like to go to Europe and do more gigs in Japan. If we can go to the United States again, that would be great.

You have fans all over the world, are there any destinations you’re thinking about touring?

Right now, we’re thinking about tours of Europe and other places in Asia.  In the future, we want to try and go everywhere.  It’s our dream to perform in as many different places as we can.