Since then, their infectious music has been spreading all over Europe, being featured in  British TV show Skins and, most recently, Best Goals of Manchester City 2012 — a video compilation by the Manchester City Football Club.

I was fortunate enough to catch vocalist Lomax to have a few words about their awesome music, recent success and their expectations for their new activities before they flew off to China for their upcoming shows there. 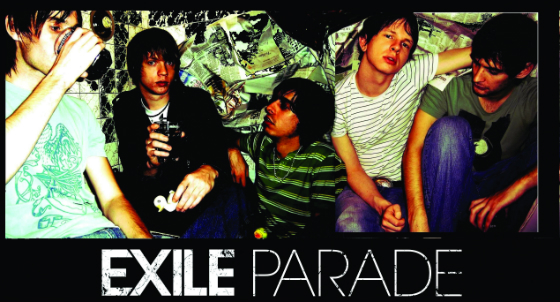 It seems like Exile Parade has received a lot of attention since the live house days. How do you plan to harness this wave of success for your future as a band?

That is exactly why we are coming to you. Our Chinese fans have made this happen. We just do what we do anyway. The plan is to get Exile Parade into as many heads as possible, write more releases and play more shows wherever we can and get to the finishing point, wherever that is.

China and Britain are bound together in a lot of ways, more so in business and the fact you produce pretty much everything we have in our homes. I think it makes perfect sense for northwest English culture to be brought to your doorsteps. The music and art our part of Britain has produced had reached around the globe well before any of us were born, and it still resonates in America today, for example.

It feels, in the west, everything has been saturated and squeezed for every bit of money it has. Music is a joke at home right now. Unless you’re the Queen of England, nobody in the music industry wants to know you unless you’ve got fifty 2-minute pop songs about girls.

China is our through the looking glass, and we are the soundtrack to whatever it is happening to you all.

Hit the Zoo is your first full length album, hopefully of many more to come. Please share with us a little of the adventure of creating your very first album.

The entire process was an adventure, I’m not going to start getting into who did the craziest sh!t, man, it’s lame. The adventure is on the album, that’s what happened. You can’t fit the whole story on just one album, so we need to do more albums.