Heroes in Their Own Rights – Interview With Eastern Sidekick

When I read that Eastern Sidekick was coming to South By Southwest I was jumping around with pure glee. I have loved them since their first EP release and have followed  them dutifully ever since. It’s always exciting to see a band that you love get noticed by a larger audience, because it means they’re doing something right. And Eastern Sidekick is doing everything right.

In 2013 they were picked up by Korean indie label Fluxus, which gave them a lot more strength in the Korean industry. Fluxus is known for helping boost the notoriety of independent acts, and I couldn’t have picked a better act for the honor. Eastern Sidekick create songs that will move your soul, with slower songs like Natural Wind that blend intricate, delicate notes with the rough vocal renderings of lead singer Juhwan. Then you can have your socks knocked clear across the room away from you with tracks like There Comes and Goes the Thirsty Dog, a rough, gutteral sound that stomps it’s way through your veins until you have nothing left to do but dance. Eastern Sidekick is one of the most energetic on-stage presences I’ve had the joy to see, and they’re also great fun to talk to, read on to hear what they had to say.
—

Hello, will you please start out by introducing yourselves and what you do in Eastern Sidekick?

And I’m the drummer, Myungchul Ko

[Juhwan Oh is on vocals, but had stepped away during the intro] 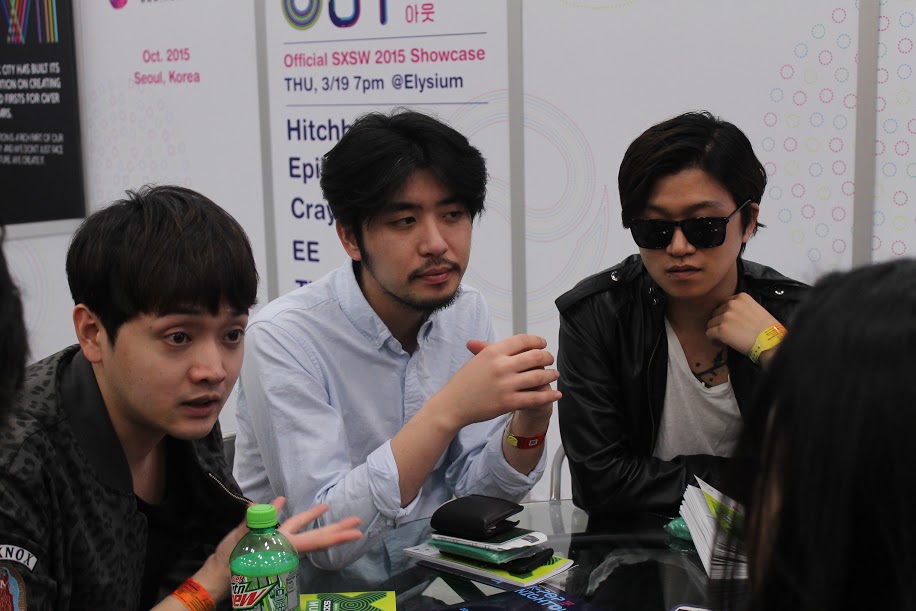 You’ve played a number of large festivals around the world before and of course small venue in Korea too, what kind of shows are your favorite? What do you hope for your American showcase?

Your sound has a very unique quality to it. It’s hard rock, but has a very Korean flare to it. What would you describe your sound like to new fans?

Hangyul: I don’t know. It’s mostly rock. It’s not something we purposely wanted to have the influence of Eastern society. It flows naturally out of us. It’s our personality, it’s our taste that makes up our music. And it’s working for the fans.