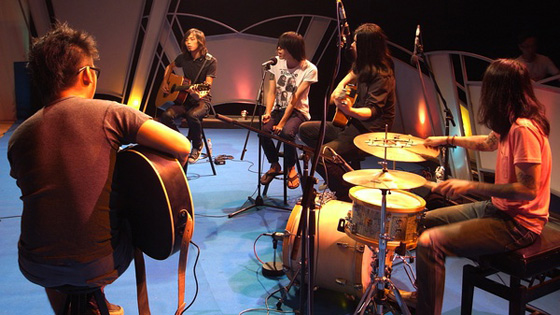 What are your favorite things in live shows compared to recording in the studio?

We always love live shows more than everything.

Playing live doesn’t only mean performing. It’s, indeed, the sharing of a passion and energy with the audience. Every live show is never the same. When you’re playing in front of different audiences, you feel different every time, which makes the live show different each time. The moment of feeling the energy on stage, sharing the passion and music with the crowd always makes you feel so alive.

Are you guys working on material for a second album or are you just focusing on releasing singles at the moment?

We’re recording our second album at the moment, but with a hectic schedule of gigs happening in the next few months, we’ll have to try our best to make good use of our time. We’re trying to put out our second album by the end of November of this year. If the world really ends in December of 2012, people would still have a month to enjoy our album.

We will make that month count!

If comparing to our debut album, this time we’re trying to push the sound much further. We’re trying to experiment more with blending different elements into rock music. We’ve also been putting extra effort in the music arrangement as well.

The composition process has been long, and we’ve all been through different ups and downs. Our inspirations are mainly drawn from our daily lives, and as our lives have always been full of ups and downs, so you can expect the songs are gonna be quite different from each other in the upcoming album.

Thank you so much, guys, for taking the time to answer these questions!

Thank you so much for your interview, cheers!

Chochukmo will be playing the Zebra Music Festival (星尚热波音乐节) on July 22nd, and with Exile Parade at Yuyintang (育音堂) [Official Website] [Smart Shanghai] on July 24th.