Glam is Back: Interview With Victim Mentality

Hair? Check. Make-Up? Check. Outlandish outfits? Double Check. Is it the 80’s you ask? No, but Victim Mentality is certainly bringing flair and fan fare back into the metal scene in Korea. When they debuted in 2009 they started just playing metal covers, but now the men of Victim Mentality are poised to release their first full-length album at the end of March.

Before this energetic and eclectic crew made for the US, guitarist Kyung-Ho Sohn opened up a bit about the band’s beginning and their hopes for their time in the United States.

Hello! Would you please take a moment to introduce yourselves and tell us what role you play in Victim Mentality?

How did the band form?

Krocodile and I were friends and decided we wanted to make a band together. That was in 2009. When we first started we used to cover songs by classic heavy metal bands like Iron Maiden and Judas Priest, but then we started to write our own songs and develop our own style. We recorded a CD single called “Magic Finger” as a duo, and Scorpion joined us on bass before it was released. For a while we played as a trio and used a drum machine for live shows. Then last year Tarantula became our drummer. 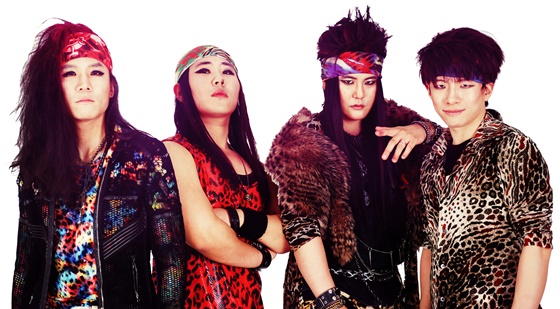 You’ve stated that your love of ‘80s glam metal bands was why you picked to perform in the genre, who were your biggest influences in this style of music?

Motley Crue! Actually, the first song we wrote as Victim Mentality was made by copying a Motley Crue riff. We also listen to hair metal bands like Styper and W.A.S.P.

I think musically we’re most influenced by Iron Maiden and Judas Priest. If you mix those groups’ classic heavy metal sound with something like Poison or Twisted Sister, the result is Victim Mentality.