Genre to Go: Bingsu Pop & the Martian Girls of Seoul 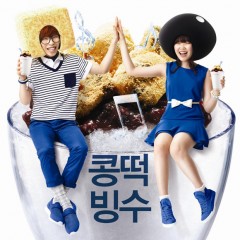 Bingsu Pop, or Bingsoo Pop:
Indie pop from South Korea that combines alternative rock attitudes, twee vocals singing about desserts, animals and the lighter side to life, plus the electro edge of mainstream Korean pop [1].

South Korea is probably the hippest country in Asia. If cool French bands like Phoenix are referencing your dramas in their videos [1], then you pretty much hold the right to make that claim.  I could say this era in Korean pop culture is similar to the Cool Britannia days of 1990’s Britain, when the Spice Girls conquered European pop, Kate Moss ruled the catwalk, and Trainspotting + Four Weddings and a Funeral were on the big screen.

I mention Cool Britannia because during that period there were a lot of young bands running around on the scene, all of them weekly cover stars on the music magazine racks. Indie pop managed to hit the mainstream charts for the first time during this period, outselling American rock simply ’cause a lot of the songs spoke to the UK at the time. They were unique in that quintessentially British way, and upbeat, and not ashamed to hold up a mirror to the country, with strong English accents singing about class systems, alcohol, and hard-to-read girls from Mars driving skinny boys mad [1]. Indie pop soon became known as britpop worldwide.

Fast forward from the death of Cool Britannia in 1998 to 2013 in South Korea. The Korean Wave still ebbs strong, and there are as many new indie & pop groups as there are new coffee shops for the ever growing middle class. Last year saw the rise of acoustic indie boys like 10cm and Busker Busker [1], but this year one can’t help notice a plethora of female-fronted groups with names straight from the coffee shop directory or menu: Chocolate Box [1], Sugar Bubble and Cheeze are just a few examples.

This track by Cheeze is called Mango, and there are plenty of other food related titles out there like Blueberry Muffin Recipe (by Rururu; MV below), Ice Cream (Garina Project), Waiting to Order (Sugar Bubble) [1], and the animal related but equally playful Adorable Bunny (Myu Myu) [1]. These tracks are as twee and cute as their titles, perhaps readymade for younger audiences more familiar with idol groups. They feature shavings of quirky electronica on top of naive vocals and occasional indie guitars, making a genre I dub as ‘bingsu pop’, a promising new scene with a lot of rising talent, much like the britpop one that emerged in 1990’s England.