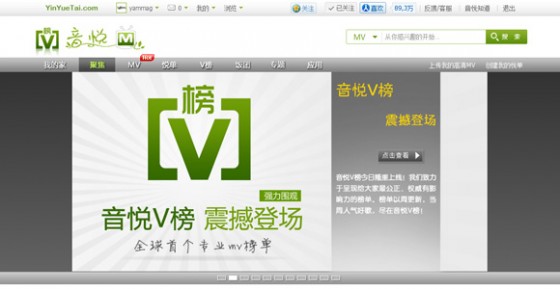 I just recently realized YinYueTai is a China-based website located in Beijing. I think I always thought that it was a Taiwan-based website for the “tai” in YinYueTai — but that’s me being stupid, I guess. Ha!

The only negative thing I can really point out — in the hopes that they make it easier for us who don’t read Chinese characters (traditional or simplified) — is that they need, at least, an English language option. But alas, if you like a product, you actually end up learning how to use it, working around language kinks.

There are many cool things about a website like YinYueTai, which basically is like Vevo — only without the region restrictions, HUZZAH! The YinYueTai “About Us” description basically says that the website was founded because there was no place on the web where you could watch high quality music videos as a standard without running into a lot of useless bad quality re-uploads.

A huge website like YouTube has millions of music videos, but many of them, as varied as they are, have a video quality of less than 480px, which renders the content null on YinYueTai, where the minimum is 480 without stretching one pixel. Each video uploaded on the site goes through an upload approval that warrants that each music video in their database is as clear as it can be.

You know, kinda like Vevo. But Vevo has many-a-times sucked the life out of YouTube. And if you actually go to Vevo.com and you’re not in the US (or maybe Canada?), you’ll end up with a message telling you Vevo is not available where you live.

But besides the way the YinYueTai video upload and streaming system works, there are five features that I love about it.