How has your time been in Austin? How was your first US performance? Any surprises?

Sohee: The weather is SO nice. And I’ve never seen a swimming dog before. I saw a dog swim.

Shinae: We just went to the river. And Korea is so small, the parks are so small. Not many people have big dogs on Seoul, so it’s kind of cool for them to see the big dogs walking with their people, and dogs were swimming with no restrictions. It was a really cool thing.

Shinae: Yes. Especially there in the crowd were music business people. Yeah, for a first gig it went very well. We’re really happy about the performance. And we were wearing Hanbok in the beginning. It was a really cool experience for us. And it went really well. We were happy. And all our staff was working really hard on promoting us. Like, “Yeah, 1950s, 60s style doo-wop girl group from Korea!” 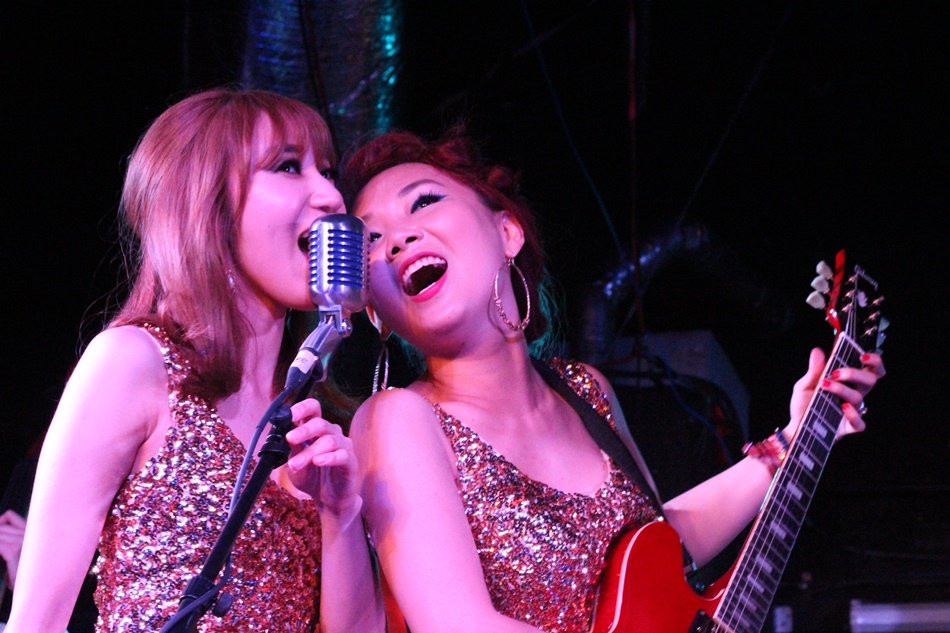 Do you think the current expansion of the Korean indie music scene has helped make way for acts like yours in the music scene in Korea?

Shinae: Absolutely. Yes. Actually just before coming here we had a concert in Korea, kind of like a rocket launch thing like, “Here we go!” We did the whole set of what we were doing before, and we did it with Crying Nut. Crying Nut’s like our boys. We love them so much. And they’re so nice. We were elementary school students when they first released their album. They’ve been around for a long time. And they never changed their band members, and I’m pretty sure they never changed their personality too.

I mean, late 90s they started the band, punk band in Korea. I can’t imagine what that would be like. Like no bands from Korea never play outside of Korea, officially. Not like this. I mean, there was no internet, no promotion, nothing. But they started it from there. And they did it really hard, and if they didn’t do their thing we wouldn’t be here. And they’ve been encouraging us, supporting us so much. Like posting about us on Twitter, even before we were recognized.

If those guys weren’t doing what they’re doing, which probably could really be hard to keep it the way it should be, it could’ve been impossible. And No Brain’s there, they’re the same deal. We now have experienced staff, it’s because of those guys, guys like them.

Thanks for your time! Any last word for the readers of YAM?

Sohee: So happy to be see you in Austin, and really grateful that you’re here, and really hope to see you again.

I had such a great time talking with these girls, they’re not just bright and cheery on stage – they really are that happy in real life. Even through jet-lag & exhaustion they were spunky and talkative. And if you ask me, these were the ladies of the night, hands down, for K-Pop Night Out (Don’t tell Crayon Pop!) I look forward to seeing where their musical journey takes them. Since SXSW they’ve already been to Hong Kong and are looking to play a number of music festivals in Korea this summer.

Their music is available on iTunes & Spotify – remember to support your favorite musicians!