For your debut album you explored some traditional Korean folk songs as well as doo-wop, do you plan to or desire to cover any other songs or artists? Are there any still active musicians you’d like to work with?

Shinae: Oh yeah. Actually, we collaborated with one of the folk singers from the 1970s, she’s like the Joni Mitchell of Korea. Her name is Yang Hee Eun. Yeah, she first contacted us that she wanted to have us on her album to collaborate with. Which is huge. It’s insane. She’s a super nice woman, like she was so good to us, and we were really happy to collaborate with her.

There’s another artist who’s also a folk legend of Korea whose name is Seong Cheong-suk that we overheard that he really likes us, like he’s a fan of ours, and he really wants to meet us. And actually just before coming here they were doing the biggest live music show in Korea called Immortal Song on KBS, and it was their special. Like Yang Hee-Eun, Seong Cheong-Suk, and a tribute. And they were on the show and they wanted us, like they especially wanted us to be in the show, but we couldn’t because of this.

So, I don’t know. I always love meeting the older generation musicians in Korea because they’re so cool. Especially the time that they’ve been through, there wasn’t much freedom around back then, but they survived as musicians, how cool is that? You know, they never gave up.

What do you think it is about doo-wop & folk pop that connects so deeply with a wide variety of listeners?

Shinae: That’s probably why. We’re young people doing old music in a new way, and it has a little bit of everything. And it’s three vocalists too. Like individually we have three different voices. As an example, in the Andrew Sisters, they’re sisters, right? They have very similar voices, so it almost sounds like one person. But when we sing it’s very different, like we sing very differently, and our personalities are totally different. So when we sing together it’s like I guess it’s like a buffet. 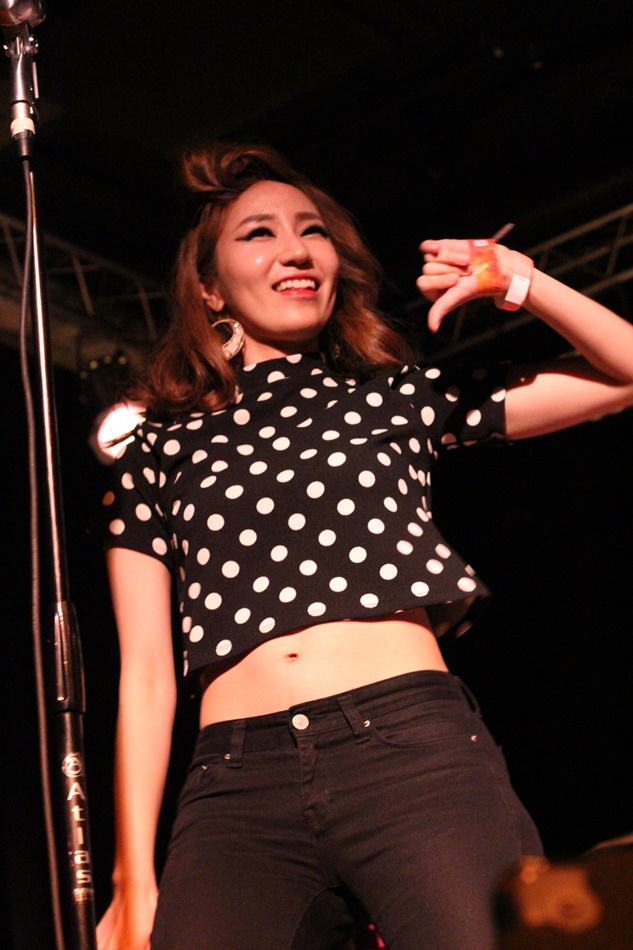 Shinae: Yeah, a musical buffet! You can have all kinds of food when you go into a buffet. You can have salad, barbecue. I think the three of us, different personalities, is most the important thing as Barberettes. And we want to keep that.

Then Korean culture is like not much diversity. It’s all about people aren’t allowed to be different in many ways. But I think what makes us special is that we just be who we are individually in the band. Yeah, I hope that someday it teaches other people the message you can stay who you are. Like your flaws…. You could be really not good looking in Korea, which really matters, and other things like your personality has flaws, you don’t get along with people very well, but it’s okay to stay that way. You know what i mean?

I hope that someday that could be the message when people look back on the Barberettes. Like they were the group [that] gave this message.

Shinae: Yeah it is. Especially in Korea.

Since you’re pretty new to the music scene, is there anything that has surprised you? Or anything you want fans to know about making music?

Shinae: Everything.  For myself, I’ve been in the industry as a jazz singer and backup vocalist and songwriter for 12 years, and this is my first major thing. Well, I’ve been through the music process many times, I’ve recorded music thousands of times, I wrote many songs before, and the biggest realization that I had through this process is people.

I think being a known artist, like getting known, the biggest part I think is people. People you work with, people who listen to you, the people you perform in front of, and the musicians that you play with. It’s all about people, and trust, and respect. And I think that’s what’s most important for being an artist, and an artist that gets exposed to other people. And you want to inspire them. That’s what I learned through this process.