When I first heard The Barberettes I felt an instant connection with them. I love doo-wop and classic pop style music, and that love was instilled in me by my grandmother. She and I had a connection with that style of music, and when I heard that The Barberettes cited The Andrews Sisters as a major inspiration I felt even closer to them. (The Andrews Sisters are from my home town, and were one of my grandmothers favorites.) So I took an instant liking to the group.

The Barberettes are the best at what they do, and it’s not just because they’re the only ones’ doing it. They have all laid the groundwork for their careers to fuel their natural talent. They have all worked hard to become the group they are and that hard work shows when you hear them sing. The beautifully melded and buttery-smooth vocals that these three ladies make will settle your soul and send you back in time.

I had the chance to sit down with the girls and ended up having quite the in-depth talk with them about how they got started and the history of Korean music. 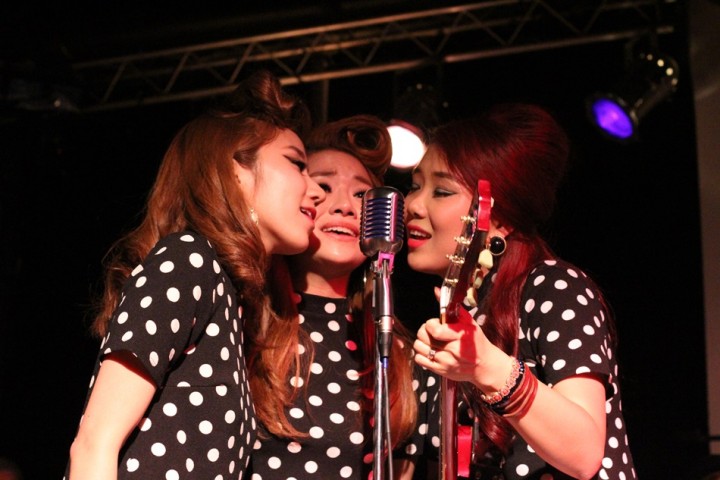 For our readers that aren’t familiar with you, can you please introduce yourselves?

Shinae: We are the Barberettes, *laughs* we are programmed to do this in Korean, this is our first time in English. As you can hear from our album we are doing 1950s music doo-wop style. With a mixture of American and Korean classic pop. And we do that in our originals and we also do covers in our performances. We are known as cover singers on YouTube. In Korea we released our first album last year called The Barberettes; Volume 1, which 8 songs were our originals.

How did you meet and decide to form The Barberettes?

Shinae: Sohee and I, we met at a music school. I was her vocal teacher, and she was a student. And we did that for around a year. And I always had Sohee in my mind, because she’s such a hard worker, and she has an amazing low voice. Very rare for young girls. So I came up with her first in my mind when I thought of the band.

Grace and I met through our friend who is a jazz pianist in Korea. And he has a jazz band playing at like jazz clubs, and we were guest singers at that place on different days. But we played on opposite days, I would play on Tuesday and she would play on Thursday. But one night she came to my gig and that’s how we met. And she has such a very fun personality and a happy vibe and I thought “Ok, well I want somebody who’s really fun in my band,” and we started practicing. I didn’t even hear her singing before I asked her to join the band. But after I heard her singing she really fit the band’s style, and she really got along with two of our voices. Like Sohee is low and I’m, like, in the middle and then she’s (Grace) like on top. Her higher voice has nice tone and gives really good feeling to the music so, yeah that’s how we met.