There are 11 acts from Korea that are attending SXSW this year, the most so far, is it exciting to be part of the expansion of Korean music exposure?

Jong-Hyun: It’s definitely exciting to be able to tour internationally and to see other Korean indie bands doing the same. There are a lot of really good Korean indie acts. It’s great that with each passing year more and more local bands are getting the chance to experience new things and expose their music to new audiences by playing overseas. These things will definitely help our local music scene to become stronger.

What do you plan for the future of the band? Are there any thoughts of signing with a label in the States?

Jong-Hyun: We’re hoping to tour the UK in late spring. Our new album will be released in Japan in May, so we’ll probably be doing shows there sometime in the summer as well.
Ju-Hyun: We’d love to eventually sign with a label in the United States. It would be awesome if more people could easily find our music in North America, and having a label based in the US that could help us with promotion and tour planning would make things much easier for us too. We haven’t had any offers from American labels yet, but we’re hoping that by continuing to work hard to build our name in North America that more people in the music industry there will begin to take notice of Galaxy Express! 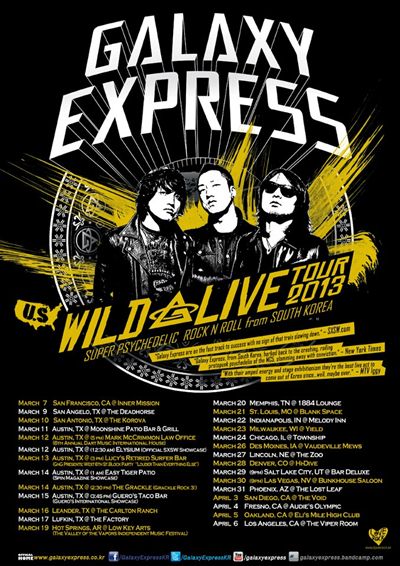 The band started their tour this Thursday in San Francisco, and have 28 stops across the United States. Hopefully you can find one close to you and check it out. I’m hoping to make it to their Des Moines, Iowa show and finally see them perform live myself.

Here is a full list of their tour dates.  Hope to see fellow rockers out there supporting the Korean indie music scene!