For the past 6-7 years, Ga-In has gradually come into her own- from awkward young adult [1], to being quiet comfortable on stage surrounded by male backup dancers [1] and exuding swag when accompanied by female backup dancers.

Of course, it seems like women of ANY ethnicity have it easier compared to their male counterparts. Society loves to look at women, and we love to sexualize them to the point where women either have to be sexual by default or fight their sexualization. There never seems to be a middle ground. So to me, it really was no surprise when Psy released his music video and a bit of all the attention was being directed at the gorgeous (by non-Korean or maybe non-Asian standard) Ga-In.

Oppa [Psy] said that he wanted someone with an Asian face that didn’t have double eyelids. [1]

Ga-In is hot, there’s no denying that, she can also be cute, she’s got a sense of humor [1] and most of all- she’s honest. Subjected to being attacked for her weight and her methods [1][2] like any public person would, she admitted to having a killer short-period diet to look the way she does in Psy’s music video. I can live with that.

Throughout the years, though, people have speculated that Ga-In has also had plastic surgery, even though there are no direct quotes that link to the confession. Instead, a lot has been said about the fact that at one point in her life, Ga-In could have been considering eyelid surgery [1][2] due to either her management or the possible surgeon in charge of Brown Eyed Girls’ physical enhancements, which the girls are totally open about. In a world and industry where denial is the preferable weapon in any circumstance, their upfront nature in which they tackle some of the criticism that might arise is quite refreshing. 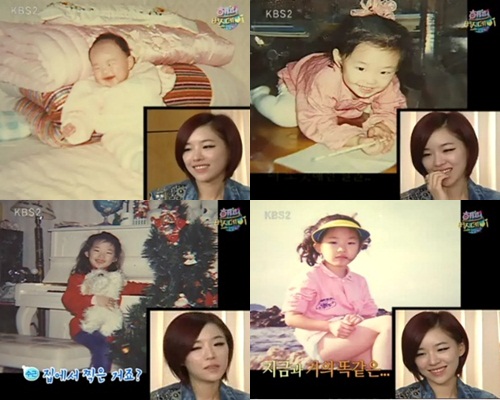 She has hardly changed from when she was a kid.

In a region where women are supposed to be doll-like of big eyes, perfect-sized nose and angelical smile — Ga-In seems to almost fit the bill to a tee. Except for her eyes, which she’s come to embrace (and I’m totally fist-pumping for that), she’s really a catch. She’s great friends with her Brown Eyed Girls bandmates, which makes her a girls’ girl [1][2][3], very likable to want to hang out with her. Moreover, she has a sweet yet strong aura that if you would ever introduce her to your parents, you know they will like her and never be totally scared of some of her “more risky” music videos. She’s THAT likable.