A Conversation about Concerts, Cameras and Fans

Shortly after I attended Pearl Jams’s first ever concert in Peru, I once again aired the typical “Peruvian taking camera shots all the fucking time” complaint, which led Amy and I to have a conversation about concerts, cameras and fans. 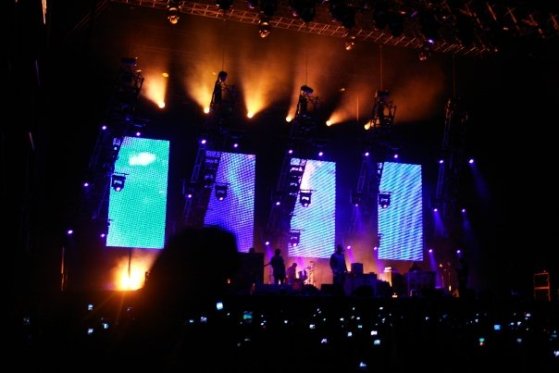 Amy: First, we start with general questions – the most important one is, which one was your first concert experience and what do you remember from it?
Rodrigo: Fragil and Pedro Suarez Vertiz live at La Feria Del Hogar a year after the Servando and Florentino incident.
Amy: So… around 97-98?
Rodrigo: Yes, around 1998. I don’t remember much from it, but that was a time when technology wasn’t like today’s. Now people can go around with their cameras and take any picture they want. I still like PSV’s music, even if I don’t listen to it that much.
Amy: I remember going to La Feria del Hogar for… Autenticos Decadentes?
Rodrigo: Around what time?

Amy: Probably 98-99? My first concert, for real, was La Ley — opening act Libido — I didn’t take my camera then. You know, those crappy ones with Kodak rolls. I think I spent two rolls for a tiny blurry Gianmarco a year later though. I’m not much of a concert person because I hate crowds, so I usually don’t like big concerts. Plus, I’m cheap. Haha.
Rodrigo: Yeah, I’m aware of that. Your passion is photography, but your phobia of concert crowds is bigger, right?
Amy: Yes, especially in Lima. Photography lenses are so pricey, I’m in overdrive when I take my equipment out, so I usually attend concerts which I know my dad would want to join. He’s like my music loving bodyguard. Heh~ So… you’ve never sneak a peek from a concert with your camera phone, then? When technology became available.
Rodrigo: I rarely go with cameras. Mostly due to fear of getting it confiscated. Wished I could have brought a camera to Soda Stereo’s concert in 2007 — not because of Gustavo Cerati’s current health status, but because it was a very memorable concert; even if their 2007 tour tarnished the legacy of their 1997 concert at the River Plate stadium, it was a dream come true seeing them.
Amy: I totally get that feeling. I prefer club concerts, though… in general. I like the small venues – which is kinda weird if you consider crowds would look bigger. But I like the smaller atmosphere.
Rodrigo: I don’t care about atmospheres and venues as long as I get to see the band I love live. But I see what you mean.
Amy: I think the same way about my experience seeing Bjork. I nearly cried at that concert — and not because I couldn’t take my camera, but I was overwhelmed when the fans sang to Bjork’s voice. Despite of being pretty mad at all the people with their cameras up! I think that was the first concert I was taken by how much technology is invading our lives.
Rodrigo: I know that feeling.
Amy: When was the first concert when you realized everyone had their cameras up?
Rodrigo: Oasis in 2009, and I rarely go to concerts because I’m lazy. Also, crowds were more of a “hit music” crowds, which is unsettling. They only seem to be stuck with whatever the radio feeds them for singles. With Oasis, the crowd really sang the songs from their first two albums, but most of them didn’t knew anything about Dig Out Your Soul. Thanks to the radio, they make artists seem like they are all one-hit wonders or worse. Example: Keane. You know they’ve done more than one album, but thanks to Oxígeno (fucking radio station), they’re a two-hit wonder band who made Somewhere Only We Know and Everybody’s Changing.