I’m an avid watcher of Korean television dramas. I think that all of my TV reviews are only Korean shows.

In my previous article, I talked about why I love Korean Cinema. Korean cinema not only intrigues me, it sometimes downright scares me. The thrillers I’ve seen so far, such as I Saw the Devil, Thirst, Sympathy for Mr. Vengeance, Lady Vengeance, just to name a few – haven’t been afraid to push the boundaries and then some. Even in other movie genres, be it comedy or tear-jerking dramas, I’ve felt that Korean cinema shows you life as it is.

A scene from I Saw the Devil

This is where I get confused about Korean cinema and tv dramas. Every single drama I’ve seen so far has been PG rated. Correct me if I’m wrong, if you’ve seen any Korean drama that is at least rated R, do tell me. I would love to watch it.

Anyway, the dramas I’ve seen have all been very well produced. Some of the stories have been very intriguing and although some plots left me hanging, they have been entertaining. What I’ve noticed is that in every single one of these dramas, there has been a huge lack of normality. There are hardly any hugs, any physical connection; heck, you’re lucky if you get a peck on the lips. In other words: a whole lot of sex is missing.

My argument is not that we should have explicit content all the time. Sex is a part of being human, sex to me is natural. I’ve seen sex scenes in Korean movies that hardly leave anything to the imagination. So why is it so hard to see the heroine and hero in a tv drama make out? 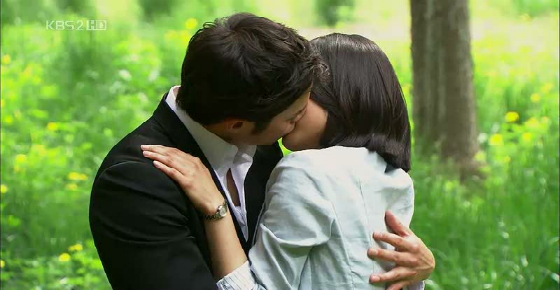 All that angst and after 19 episodes, all we got was one very dissatisfying peck… (scene from Cinderella’s Sister)

I know that some of it comes from the social conduct that exits in Korea. The elderly are very strict and old school. It’s my general understanding that the country has always been a little oppressed. Sex seems to be a very big taboo.

Somewhere along the line, Korean cinema got free of the oppression and started to create content that is so shocking, it stops being it. So why are Korean tv dramas still so 50’s? The conclusion I’ve attained is that a person can choose to watch a movie in the cinema, you can protect children and youths getting in. But if Korean cinema is being ballsy, why can’t Korean dramas as well?

I wonder if Korean television is missing out by not allowing more natural stories to be developed. Aren’t Korean tv- writers, producers and directors a little frustrated? I feel like they are getting blocked from portraying the stories they really want to portray. It’s not that unusual to hear that a drama gets a warning for showing kidnapping – or that portraying homosexual relations cause a stir, but on the cinema screen it’s nothing out of the ordinary.

In movies it’s okay, but in dramas it’s a big no no! (Scene from A Frozen Flower, promo from Life Is Beautiful)

For now I’m happy that Korean cinema is free to do what they want. I hope that the tv dramas get a little more freedom. Not that I need sex scenes to make a drama great, but it wouldn’t hurt to have a little more snogging.