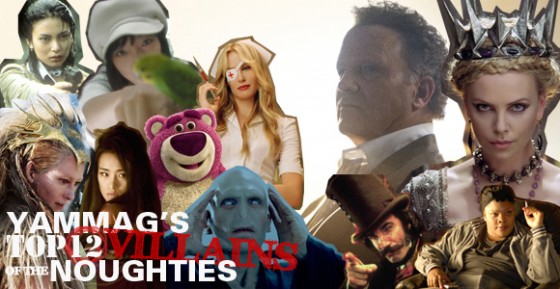 This time around [1] it’s a Hitfix.com list, which triggered the YAM Magazine team to go on another voting session. There were thousands of movies — seriously, there has been a LOT of movies released over the past 12 years — but we decided to take it easy. No rules applied. Just good old fashion voting for your favorite villain regardless of original medium, which means… the most watched movies had the most votes generally.

No. Voldemort didn’t make the Top12.

Neither did Mo’Nique for her award-winning role on Precious, nor Tilda Swinton for her latest performance as The White Witch in the Narnia series, or even Sakura Ando’s psychotic performance on Love Exposure. None of the people in the graphic above made it, but they were in the running.