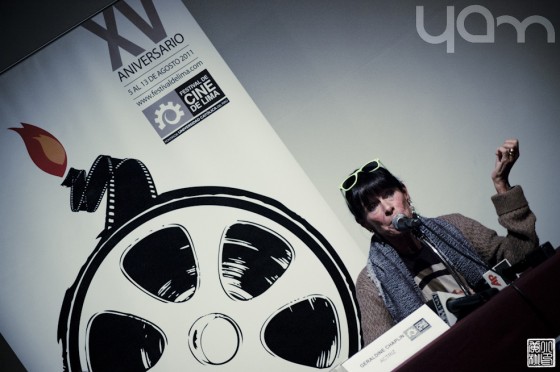 Geraldine Chaplin, most commonly known as Charlie Chaplin and Oona O’Neill’s daughter, arrived at the Peruvian capital city to precede the jury of the Fiction Competition [1] at this year’s Lima Film Festival. Arriving a bit late, Festival director Edgar Saba blamed himself for the tardiness as they placed themselves in front of the press.

Geraldine Chaplin seemed relaxed, wearing comfortable winter-y clothing, but bursting with energy as she replied to our questions in a lightly Spaniard-accented Spanish, often accompanied with a wickedly funny sense of humor. The morning was certainly filled with an amount of quotable quotes that will surely make their rounds online, as she commented about her decision to start acting, about her relationship with director Carlos Saura, her father… and even a little nowadays Hollywood.

When asked what Charlie and the character that made him famous meant to her, she replied “Charlie Chaplin is my father, Charlot is my hero.” And so the room erupted with applause.

Gerarda, as she apparently likes to be called, explained that her decision to become an actress was purely a selfish one because in reality she wanted to be a ballet dancer — in her head, she was perfect. However, it was hard to match that with reality. She’s worked at a circus cleaning the elephants, but she states that it’s not as romantic as it sounds. In the end, she recognized that having her family name could open doors, and so it did. Her agent thought she’d be perfect to debut alongside Jean-Paul Belmondo, and so she did in Crime on a Summer Morning.

Chaplin commented on the different work relationships with director David Lean and Robert Altman, complete opposites as far as working relationships go. She described Lean as a perfectionist to the millimeter that didn’t want to hang out after shooting with his working actors in fear of the actors’ strong personalities clouding his view on the characters on film, while Altman pretty much held “fun” viewing parties. 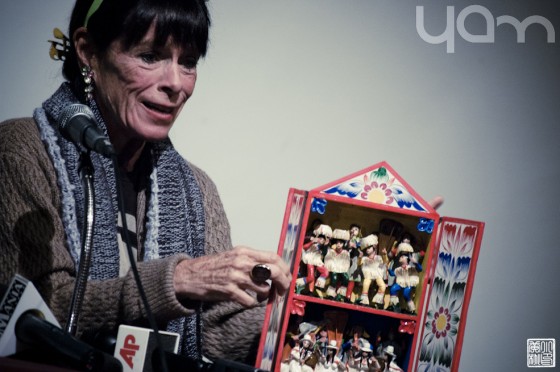 At the moment of his question, press member Hector Turco from Ayacucho presented Geraldine Chaplin with colorful wooden Retablo (Wikipedia), which the actress received with much content, and was incredibly surprised at the details within the craft.

Because the Lima Film Festival places a lot of emphasis on Latin American cinema, the conversation veered towards her working and personal relationship with director Carlos Saura, teasing her audience by saying colleagues were a little bit jealous because she not only worked with him but also went home with him. Everyone laughed as she continued talking about what is exciting about today’s Latin American cinema by naming La Sociedad del Semaforo as one of her favorite contemporary Latin American films.

When asked about the difference between Latin American film productions and Hollywood ones, Chaplin joked, saying the Hollywood ones had “pasta” (money), but mentioned that a lot of Hollywood films were too worried about getting butts on the seats.

Chaplin also commented on the role of women in today’s world saying that “We’ve given many steps forward, but many steps backwards as well. It’s sad but it is that way.” And closed her statement with “Sometimes I wish I were a man.”