Madhuri has commented on the good ole days when stars would sign a movie without a script. How many drafts and rewrites did Gulaab Gang go through? Any changes that you would have loved to include in the final cut?

Oh I guess 5 or 7. Umm. The conversation scenes could’ve been allowed to slow burn in the first half. Also some spoon-feeding informative scenes and dialogues I would’ve done away with. I believe in the unsaid more than spelling out everything. 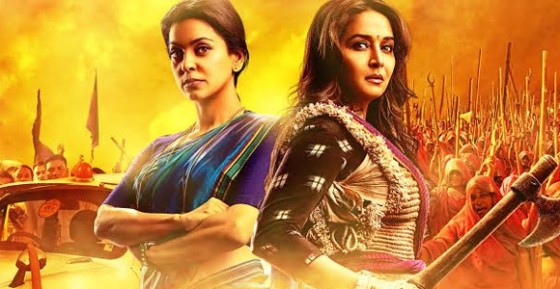 My only complain is that we only get like 4 scenes of Madhuri and Juhi together on screen. What was your favorite scene to work on? Which one was one of the most complicated ones to shoot?

The one they meet for the first time. And Juhi’s venom literally spills out through her nonchalance and matter of fact-ness. While Rajjo is aghast and pained at how a woman can look at a violation of a girl child with such demeanor her hopelessness morphs to seething anger and bloody retribution. All in the click of a single disconnect of a phone call.

That was my favorite scene! You could feel the tension even without understanding the words, and Sumitra’s reaction to Rajjo was the icing on the cake.

Were Madhuri and Juhi emotionally prepared to discuss the price of silencing a rape case (and the consequences of that silence) as nonchalantly as their characters did? It seemed like the most serious scene that you guys had to shoot.

Yes, we had done elaborate readings of the film when we began the film and its making. They knew the implications and the circumstances, the mindsets of the characters and what they were essaying. Juhi was shocked when she heard the film, but on shooting day it was smooth. In fact, now that you mention it- it was the first scene they shot for. You could say Madhuri coming in and handling the letter to Juhi was the first time ever they came face to face and shared a frame.

The film went through a tough time with its release date and seems to still be having disputes for TV and home release for its relation to Gulabi Gang, do you feel the reception of the film had to do with the controversy prior to release? Or do you feel that the premise of the film wasn’t enough to pull people in?

The stay on the film affected the box office a great deal. I know that people weren’t even aware that the stay had been lifted. So we lost numbers for the weekend and by the time the good word of mouth started to spread inexplicably posters of the film literally vanished from hoardings. I wonder why.

However, the film was made on a really tight budget and the producer was able to recover his investment. The premise was radical, and I agree that in a country where most people come to get entertained and have a laugh with a tub of popcorn, a hard hitting political drama doesn’t cater to that, but the appreciation that we’ve got for this film is just overwhelming. Without the controversy it would’ve, of course, done much better.