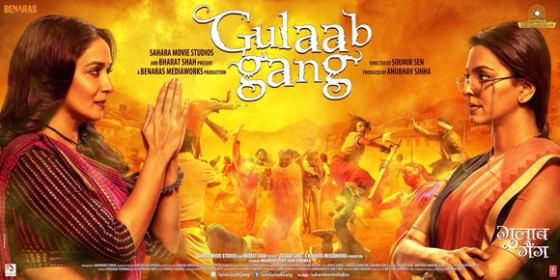 Casting Juhi & Madhuri together was brilliant. Do you hope that this can start a trend in building strong and meaningful roles for veteran actresses?

I hope meaningful roles do keep getting written. And they do. However, meaningful and central roles for veteran actresses is more or less in the same zone as veteran actors. The audience and the market is largely young, and producers by and large see them as the target base. But while that will continue to be the dominant domain of writing and casting, exceptional human stories need to be told too. And I’m sure roles like these will come about. Numbers? We’ll have to wait and watch.

Were any other stars ever considered during the writing of the script or pre-production process?

Yes, I had pitched the film initially to Tabu and Raveena, but things didn’t work out. Had spoken to Shilpa Shukla, Radhika Apte, Swara Bhaskar, Nimrat Kaur too, but for an ensemble-film date-matching became very difficult.

Very difficult. Largely because there was perhaps no reference for her to grasp and also because this is something she has never done in her life. She initially refused owing to the blackness of the character and asked me to tone it down. I gave her a past and a justification, and illustrated how that would completely rob the character of all its punch.

Many veteran actors have jump-started their careers playing negative roles that have earned them praise, do you think actresses in these roles will have a harder time to be accepted because they were someone’s first on-screen crush and we’re bursting people’s bubble?

I think the bursting the bubble has its novelty value. Contrary to what you’re saying if it is done right, it gets accepted as a ‘wow‘ factor which is what happened with Juhi. Also it went diametrically opposite of the Juhi we have come to accept. However, historically, such examples work well as a one-off unless someone consciously chooses to play baddie subsequently like Prem Nath did after hero roles dried up for him.

When you’re no longer saddled with the responsibility of playing the good protagonist, the actor in you starts to experiment with diverse roles that come your way. The acceptance that you speak of is a gamble, but the actor is willing to play the game after having exhausted the repertoire age and the market would, perhaps, allow, so now it’s a new avenue for them.