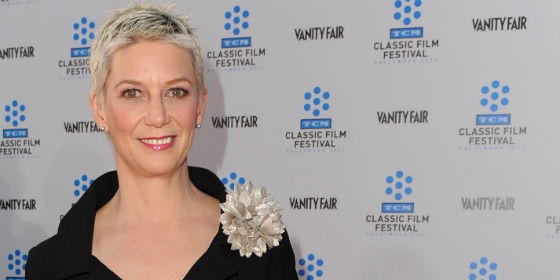 YAM: I was wondering if you could say a few words about film preservation in general.
Patricia Ward Kelly: I would say when you say film preservation, you say Hugh Hefner because you need people like that, that are passionate and they understand the importance of film preservation.
YAM: He screens movies every weekend.
PWK: Yes! I go. He just showed Singin’ in the Rain. I think he really believes in it, he really understands the importance of it. So many of the films are just going, are being destroyed and we’ll never see them again. Fortuantely, with Gene’s work, most of it is preserved.

YAM: I saw one recently, that I had never heard of…
PWK: Invitation to the Dance, I bet.
YAM: No, actually, The Tunnel of Love.
PWK: Oh, Tunnel of Love!
YAM: He directed it, but he didn’t star in it. I thought it was fascinating.
PWK: Watch Guide for the Married Man, he directed that. I think he fares better, but there are many and it just breaks your heart.

YAM: That’s why I love TCM so much is because they show a lot of things that aren’t on DVD, so you can expose them to people that otherwise would never…
PWK: The other name I would say is Kevin Brownlow. Those are the people who, where we see things because those people are passionate and smart.
YAM: Film history is what I really love.
PWK: Oh good.
YAM: That’s what I’d love to do, get more history out there.
PWK: Keep me posted. Are you on Facebook?
YAM: I’m on Facebook. I’m on Twitter.
PWK: I’m on Facebook as Patricia Ward Kelly, my maiden name.
YAM: I will find you.
PWK: Okay great.