Would you like to talk about Shambala, your wildlife preserve?
TH: Sure. I’m involved with this because of the films I did with Hitchcock, that gave me the presence, the celebrity. I did two films in Africa, back-to-back in 1969 and 1970. During those years environmentalists all over the world were telling us that if we didn’t do something right then to save the animals in the wild, by the year 2000 they would be gone. Just due to encroaching civilizations, sport hunting, poaching, all of those kinds of things.

My then husband was a producer, so we thought let’s do a movie about this issue. We were kicking around ideas, and we went on a photo safari in Mozambique and on the Gorongosa Game Preserve there was a house that had been abandoned by a game warden because it flooded during the rainy seasons. He moved out and a pride of lions moved in. It grew to be the largest pride in all of Africa. There must have been twenty-five or thirty lions of all sizes living in that house. They were sitting in the windows looking like great portraits. They were going in and out the doors. They were napping in the verandas. The little cubs were playing out in front.

It was a delicious sight. Very dangerous. You could never go near it. 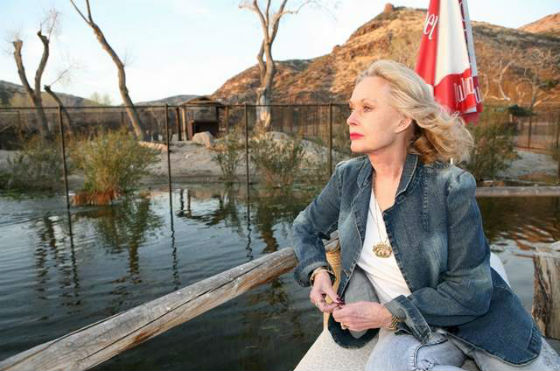 But we thought, bingo! There is the movie set. So when we got back to California the script was written – sometimes using ten cats, sometimes using fifteen. We were going to have Hollywood acting animals, a nine month shoot, over and out. But because of the instincts to fight an animal, they don’t know, none of the trainers of these Hollywood acting animals would okay doing the movie [Mr. Kingstreet’s War].  They said, “I don’t want my cat hurt. I don’t want to get hurt. Get your own animals to do it.” Well, that opened a can of peas.

So it started out with one little lion we rescued. At one point we have 150 big cats that we rescued.  It’s pretty amazing.

Are you ever able to interact with them?
TH: Yes. When we were doing the movie we all interacted with them and we were all hurt.

Severely?
TH: Well, we all survived. Two people were almost killed. It was horrible.

Were you able to get insurance for that film?
TH: Well the insurance kept going up.  It was a real learning experience, and one that I would do over again in a minute, knowing full well what would happen. On the other hand, if we knew full well what we were getting into, we would never have done this because it was just so volatile and expensive. There wasn’t an easy thing about it. 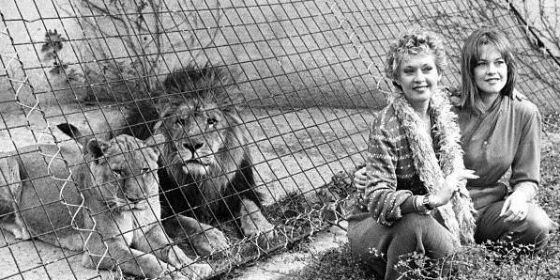 Hedren and her daughter Melanie at Shambala

So I put a bill together and took it to my congressman, Buck McKeon, to stop the interstate trafficking of these animals, which was a baby step. He introduced the bill, I testified for it and in doing so I listed about eighteen accidents. Starting with a four-and-a-half-year-old boy in Texas who had his arm ripped off by his uncle’s pet tiger. This was in the early 80s, something like that.

An eleven-year-old girl went into a cage with her stepfather to groom a tiger, and he closed the gate, the tiger jumped the little girl and killed her. Bit her in the neck. Dead. A seventeen-year-old girl went with her friends to get a really cool photograph with a tiger for their yearbook. They all went up, had their picture taken. She went up, the tiger moved, stepped on her foot, she screamed, he jumped her and killed her.

A little ten-year-old in Minneapolis went with his father to a friend of theirs who had a collection of lions and tigers, and it was his m.o. to bring out one of the tigers for a photograph with his guests. The tiger got a beat on the little kid, because they like little children because they look like easy prey. The man opened the gate, the tiger went for the little boy and instead of closing the gate, he went to help the boy and the lion got out and they both got that little kid. He’s a paraplegic, I don’t even know if he’s still alive.

None of these things should have happened. That’s just four stories. They’re all senseless. I have about ten from the movie of us getting hurt. So I’m on a mission to get the breeding stopped. Hopefully, it’ll happen. It’s important.