Can you talk about when your daughter, Melanie Griffith, decided to go into acting? How was that for you?
TH: All those years she would see how hard it is. Being an actress is not all Klieg lights and, you know, red carpets. It’s a lot of work, a lot of responsibility, an early morning and late evenings. Your life is consumed with that picture if you have a lead role in it.

She saw how hard it was, and I was so surprised the day that she came to me. She had been to an interview with an older, not too much older, friend and they said that the friend was too old, but they looked at Melanie and said, “You’d be perfect.” So Melanie came home and said, “I think I might have a movie,” and I said, “Oh, that’s nice.” [laughs] When she got it, I went, “Wow,” and why would she want to do that? This is a very difficult industry. Really difficult. 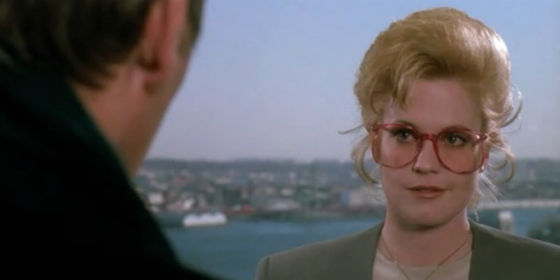 She was one of my favorites as a child. Working Girl was a favorite of mine. I used to, instead of pretending to be a princess or something, I used to pretend to work in an office because of that movie.
TH: How fabulous.

Then I discovered what office work is really like; not quite as awesome as Melanie Girffith made it look.
TH: [laughs] She was really wonderful in that.

I recently saw her in Something Wild and I was blown away.
TH: Remember how she looked in the beginning?

Yeah, with the Lulu haircut.
TH: She was so unique looking, I said, “Who created that look?” and she said, “I did.” She did it.

She was amazing in that.
TH: She’s an amazing girl. 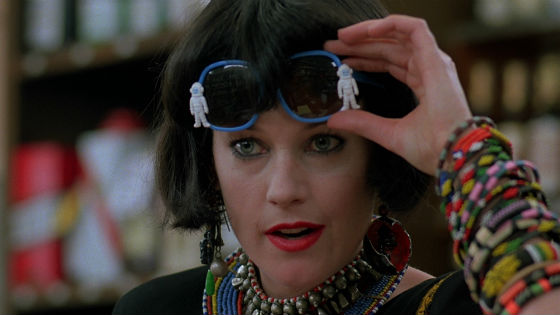 Griffith in Something Wild

Would you like to talk a little bit about film preservation?
TH: Absolutely. I think that the fact that so many people have been really concerned about saving film, about finding them.

Like [Kevin] Brownlow, who goes around trying to find lost films.
TH: Yes. It is so important, to keep a history of our industry. It’s such a unique industry, that you even have the capability of having something in your hand that shows how it all started, and all the changes that have been made from that time. This is a fascinating industry, and like none in the world.

It’s very collaborative. Kind of why I love it, it is this art that’s collaborative more so than any other. Except maybe theater, but even with theater there’s not quite as many heads in the production as there is with film.
TH: They’re almost like two separate…

Cousins.
TH: Yeah. This is, where in the world is there an industry that is as glamorous as political? There’s every phase of emotion involved in this industry, the heartbreak and the enthusiasm. I mean, every emotion in the book can be attributed to the motion picture industry.