Could you share a little about what it was like working with Hitchcock?
TH: Working with Alfred Hitchcock was a total surprise. I had never even thought about becoming an actress. I had been offered screentests with a couple of studios in the 50s, but I was having great success as a fashion model, and I was having a wonderful life in New York.

During that time, it was the advent of the television, it was encroaching on our lives, it was right in our homes. People weren’t going to movies. I thought, if I go under contract to a studio out in California, there’s a six month option and then, all of a sudden, I’ll have moved out there to then be told, “Oh well, it isn’t working out, your option is over.” It’d be not a good business move. So I just didn’t do it. 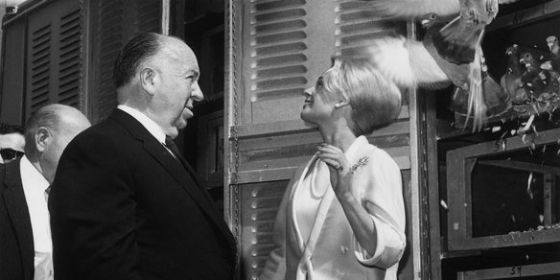 Hedren and Alfred Hitchcock on the set of The Birds

Actually, the way it was the hand of God works in strange ways. To be chosen out of that commercial, and then have the results, taking on the responsibility of taking on a starring role in a major motion picture [The Birds], with a major director for your first film. It was a huge responsibility. I took it very seriously.

Could you talk a little bit about working with Sean Connery since he was your co-lead in Marnie?
TH: Yes, he certainly was. What was so interesting was that one of the problems that Marnie suffered from, her traumatic experience when she was little, was that she really had no use for men whatsoever. I don’t think she even saw them. They were invisible as far as she was concerned. 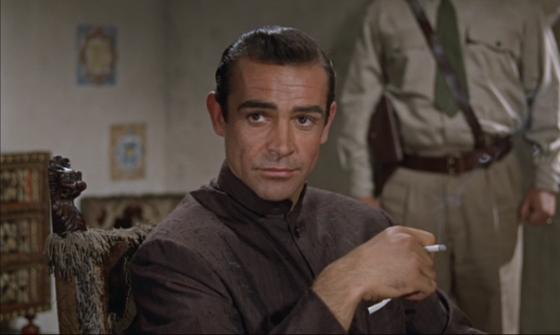 Sean Connery as James Bond in Dr. No

And then your co-star is Sean Connery.
TH: Yeah. Hitch looked all over Hollywood for the Mark Rutland character, and he couldn’t. No matter who he looked at, he didn’t like them. I mean, they weren’t right. So one day he comes into the office and he says, “I found your Mark Rutland,” and I said, “Who is it?” and he said, “Sean Connery.”

[laughs]
TH: Which was so perfect. Sean was wonderful. Off and on we’ve seen each other over the period of years. He doesn’t live in this area, he lives in the Bahamas, I believe, so it’s rare that we ever see each other. But it’s always fun and wonderful to see him.