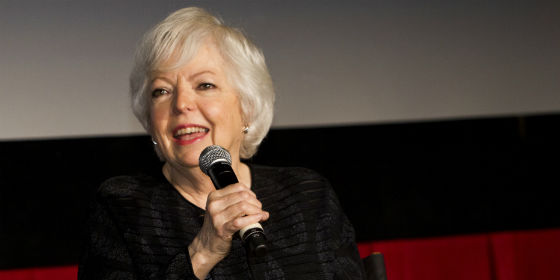 I’m kind of in shock that I am talking with you on the phone right now, actually.

You are one of my heroes. I’m a filmmaker as well as a film lover, so talking to one of the greatest female filmmakers of all time is sort of crazy.

TS: [laughs] I have the greatest job in the world. I was so lucky I met him [Martin Scorsese] when I was so young. He changed my life. I don’t know what I would have become if I hadn’t run into him.

That’s one of those questions you don’t ask yourself because you go with what you got and you got something so great.

TS: That’s true. I just had a tremendous streak of luck at that time and there were a whole bunch of things that led to it and it was just luck, it was just pure luck and I am very grateful. Have you seen Black Narcissus? 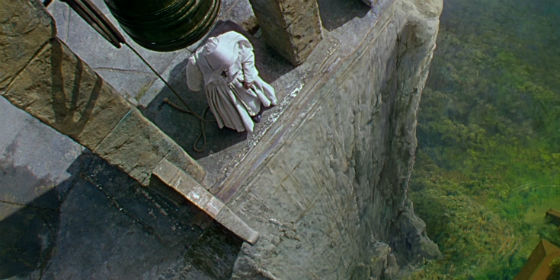 I’ve seen it on the big screen at the Castro Theater. I live in San Francisco.

TS: [Laughs] It’s amazing. He [Jack Cardiff] was a brilliant lighting cameraman and all those scenes, I love all that stuff when she’s alone in the chapel right before she goes out and they’re looking for Sister Ruth and Deborah Kerr is in the chapel, beautiful lighting in all of those moments.

And how they made Sister Ruth so crazy looking.

TS: No, I had just barely met him when we were editing Raging Bull. He had come to dinner because he was teaching at Dartmouth, which is very close to New York. So he came to dinner one night and Marty said – Marty had been educating me about his [Powell’s] films – and he said you love them so much would you like to meet him and I said absolutely.

So we had dinner and then he came back into the editing room briefly because I was editing in Marty’s apartment. Then he would phone sometimes from Dartmouth and I would speak to him. But really got to know each other after the Oscars for Raging Bull. Then that’s when things really began to develop between him and me. So it was not before. But Marty was so deeply influenced, not only by Red Shoes but also The Life and Death of Colonel Blimp. Have you ever seen that?

That’s one of the ones I’ve yet to see.

TS: It’s been restored now and it will be appearing in May or June at wonderful art houses.

Oh great, then the Castro will probably get it.

TS: You should try and see it; it’s a great, great movie. It was actually more of a direct influence. But I think Michael Powell was very important in it because he encourage Marty or triggered something in Marty that made him think he should make Raging Bull in black and white. Michael was completely besotted with Marty’s Mean Streets, his first great movie and when Marty had gone and discovered Michael Powell living in obscurity in England and brought him to the United States and reawakened everybody’s interest in the films that he made with his great partner Emeric Pressburger, Micheal said, “I want to see the locations where you shot Mean Streets.” 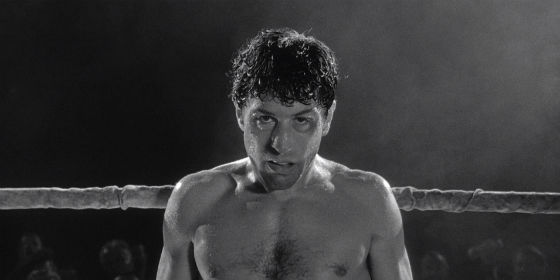 So Marty and De Niro drove Michael around Little Italy and particularly the cemetery outside the church where there is a famous scene. Then they went to look at De Niro training for Raging Bull because De Niro trained so long that he really could have fought as middleweight. They were in the gym and Marty and De Niro were discussing videos they had taken – Marty was choreographing the fights in his mind at that point. My husband saw the videos and he said, “there’s something wrong about the red gloves.” And Marty said, “You know what? You’re right this movie should be in black and white. That’s what I remember as a child. My father taking me to the movies and seeing kinescopes of the fights in black and white. That’s what we saw on television.” So that was an incredible moment between two great directors. Michael Powell just set off a spark and Marty grabbed on to it.

TS: Then in The Life and Death of Colonel Blimp, there’s a wonderful duel – a build up to a duel back in the Victorian era. When the duel starts you don’t see the duel; what you see is this wonderful ritual that leads up to it. 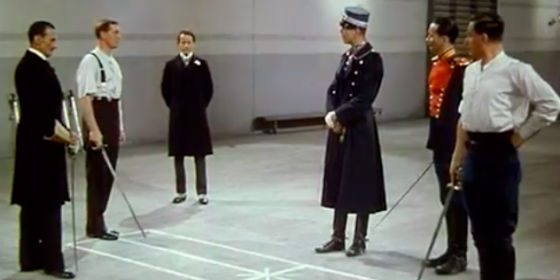 The duel scene in The Life and Death of Colonel Blimp

Scorsese used that as a direct influence on the champion fight in Raging Bull, where you start way in the basement with De Niro punching his bother with the chest protector. Then the camera moves back with them as they come out of the bowels of the stadium and up into the stadium and then finally into the ring. It’s an extraordinary shot. That was directly influence by The Life and Death of Colonel Blimp, the build up to the duel. Marty said, “let’s just get the fight over with quickly. I’m not interested in that.” He couldn’t believe that Michael Powell had the guts as a director to build up to the duel and not show it and he thought that that was so wonderful. 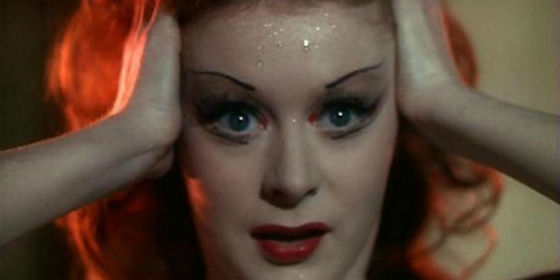 I think you would have to say that The Red Shoes was an influence on everything that Marty does. He says it is in his DNA. The startling style and use of color and the very tough story, the very interesting eccentric characters and the big struggle between one’s personal life and one’s art, which is something all filmmakers go through, anyone in the arts. You as a journalist are probably in the same position. How do you hold on to some semblance of a personal life and yet be an artist? As my husband said, art is very selfish and very addictive. So I think the film Red Shoes is an influence on his entire filmmaking career, Scorsese’s.