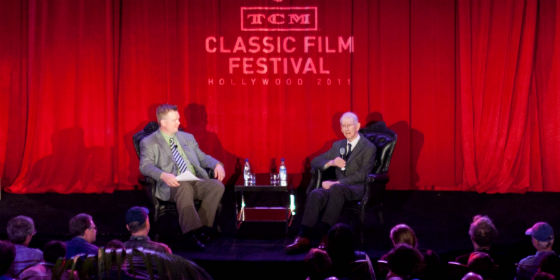 TCM: What is the ideal silent film experience?
Kevin Brownlow: When I worked on the Hollywood Series my partner David Gill and composer Carl Davis thought what a wonderful idea it would be to put that into the cinema, the silent film as it was shown in first run cinemas, and they did it. They put Broken Blossoms in the  Dominion Theater, which had 2,000 seats . The print was tinted, a superb quality, it was run at the right speed , it was accompanied by the orignal score, which Carl Davis had adapted, and it was introduced by Lillian Gish. You really can’t beat that.

However, at the end of that 19 years we ran those Thames silents and the Channel 4 silents. We showed Erich Von Stroheim’s Wedding March with the Technicolor restored, a beautiful score by Carl Davis, and it was introduced by Fay Wray, who was the star and the new head of Channel 4. Because he hadn’t been associated with it he scrapped the whole series. His name is Michael Jackson and when the pop star died I said they got the wrong one.

TCM: What was your movie-going experience like as a child in Sussex?
KB: Virtually non-existent. I went to boarding school and the boarding school did not have any interest in film. The only thing we saw were visits from Dr. Bernardo’s, which is an orphanage in England. They came to collect the money that had accrued during the year and they would show these 9.5 home movies of the orphanage. I knew nothing about the cinema, but I knew that this was terribly badly shot. [laughter] And I remember my first impact of professional filmmaking was a newsreel accompanying  Snow White and the Seven Dwarfs, the first film for everyone of my generation.

TCM: How  did you discover your life-long passion for silent cinema?
KB: The next school I went to, also in Sussex, was like a prison and literally students used to escape from it.

And the headmaster would round them up. Anyway, the only good thing he did, the only useful thing he taught me was that you could show a film in your own home. In the school chapel, he couldn’t afford a silent projector so he ran silent pictures that he hired from the Wallace Heaton library. I saw Chaplin, of course, but it was the fact that you were able to show a movie and you didn’t have to build a concrete bunker. So I went to my parents and I said I must have a projector. When I was ten I noticed a large parcel  under the tree  and eventually I opened it, absolutely beside myself with excitement, and I realized I’d forgotten to say “movie projector.” So I got a slide projector.

Had I not objected I might be today a still picture historian. 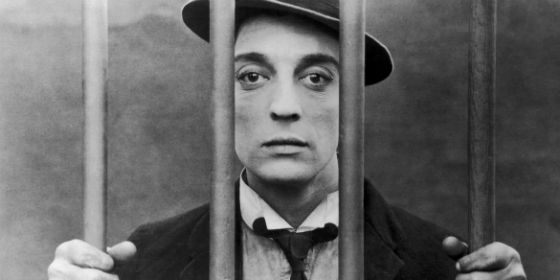 TCM: What was Buster Keaton like?
KB: Buster Keaton was everything you’d hoped he would be. First of all, I thought Buster Keaton had had a rough time in recent years. He’s going to be sitting in a corner, unwilling to talk, so I turned the volume of my tape recorder up and mine was the only tape recording of Keaton that could not be used in the documentary Buster Keaton: A Hard Act to Follow. He had a voice like an anchor chain going out.

[imitating Keaton] It was right down here. And he was so enthusiastic about filmmaking that you just had to throw a title at him and you got great stories. It was simply wonderful. And then at the end his wife said, “Have you fed the chicken?”  and he got up and he did a chicken waiting to be fed. [laughter] 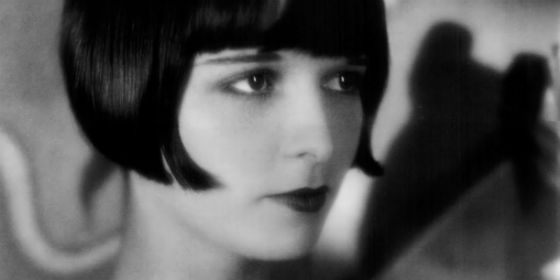 TCM: What was it like interviewing Louise Brooks and how forthcoming was she?
KB: There was a chap at the British Film Institute who was crazy about Louise Brooks, and at this point I wasn’t very familiar with her work; it was the stills that did it for me. I thought that my friend would be very envious if  I’d got back and said I’d met Louise Brooks. I found that she was living in Rochester [New York], and I was very anxious to meet James Cod and George Pratt. I’m sure that they gave me the introduction to Louise Brooks.

Now I have to tell you that Louise Brooks was in her late-50s and she, there was still this attractive woman there, but she was a powerful speaker. If you had Louise Brooks you would sit here for ten days without stirring. She was so funny, too. Very funny, very naughty and very disrespectful. And then she said [imitating her voice] “Do you got a hotel room?!” and I said, “God almighty I forgot to book it.” “Well, stay here!”  Come the morning, I had slept on the sofa, come the morning she said, “Get into my bed!”  I felt like William Holden.

All she wanted to do was make breakfast, so I just shifted over so I could say I slept in Louise Brooks’s bed.