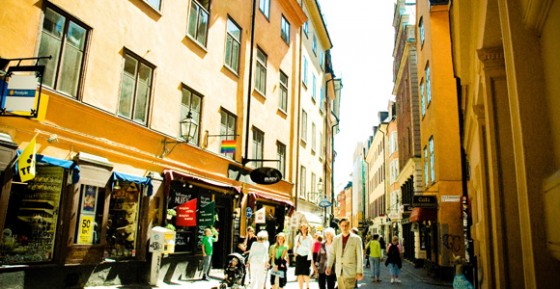 I was a bit unsure when I saw a contest in my university newspaper about writing movie reviews to win a year-long membership to the Stockholm Film Festival. I have attended the festival before, and loved it very much. Seeing as I am now a poor student, I cannot spend that much cash on movies. So I said to myself, “If I win this, then I shall go to see the movies, even though it means I am going to have to eat noodles for the rest of the month.”

To make a long story short, I won and that is very much thanks to YAM and Amy because she forces me to review things.

This year was the festival’s 20th anniversary, so it was supposed to be a good one. Looking at the movie list, I must say that they didn’t disappoint. There was a great mix of movies from all over the world, although Africa was underrepresented and Asia got a bigger representation.

Susan Sarandon, whom I saw at the cinema after a movie — She was so classy and beautiful. I managed to gather my courage and say hello to her. We shared a moment *laughs* — was chosen for the Life Achievement Award, while Luc Besson was chosen for the Visionary Award. Besides that, the films competing for the top prize were an impressive batch – among them An Education and Precious.

This year was awesome, I am almost inclined to say the best in a long while. It was great fun and the 12 days of the festival were jam-packed with movies. I was going nuts trying to make a decent list over the movies I wanted/needed to see. From 16, I was able to cut it down to 11 and then eight. I wish, though, that I had been able to see more films, especially the Latin ones, but my Asian bias was way too strong.

As far as I am aware, all of the films screened this year were sold out, proving that the festival is a popular one. I had trouble getting tickets to some of the movies I wanted to see so I had to choose difficult time slots to be able to get a seat. I really wish that the movies could be shown more than just three or four times during the entire festival. I am aware that it could be difficult seeing as there are 300+ movies to be screened during a 12 day interval. I am just being a bit grouchy.

I am already planning to get my next year membership early so that I can book tickets earlier and be able to see even more movies! I am also writing to the festival to ask them to invite over more Japanese actors and actresses *cough*Yu Aoi, Juri Ueno and Eita, thank you very much! *cough*.

P.S. thanks to the festival, I now have a huge list of actors and directors I need to keep my eyes on! Always great with new loves!