While it didn’t cause nearly as much of an upset as Shakespeare in Love did at the Academy Awards*, the film has a very controversial standing in film lovers everywhere. Setting my personal views aside, I believe it’s important to take a look at both sides of the everlasting fight that seems to be going on over Titanic. Here’s what a few people had to say about it: 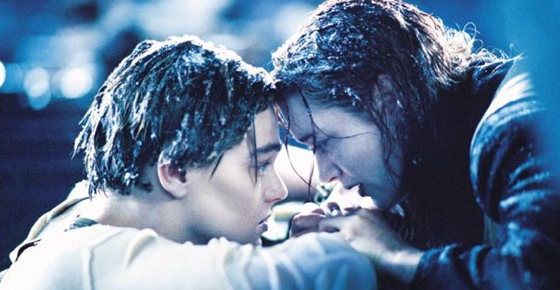 Now that that’s over, I can return to the fact that I shamelessly love Titanic. It’s not my favorite movie by any means, nor is it a masterpiece, but I’ll be damned if it doesn’t take me on a journey every single time I watch it. Maybe I’m writing this while lounging around in a Titanic shirt listening to James Horner’s score for the movie. You’ll never know if that’s true, but at least you’ll know that my heart will go on loving this movie. To close this ridiculous excuse for a feature, I’ll quote my friend Mina who sums up her feelings and mind by saying:

Titanic is more than a movie, it’s an unforgettable experience. The technical marvel that it was can be felt in every frame, every sound effect, and every scene. Titanic is a world of its own, it takes you in for three hours and doesn’t let go. It’s a love story, a tragedy, a cinematic triumph, but most of all it is an unforgettable modern epic that captures even those who try to resist. Love it or hate it, Titanic will remain one of the few movies of the past twenty years that will remain engraved in my mind and heart.

*Let’s face it. Shakespeare in Love winning BP is a thousand times worse than Titanic winning it. At least Titanic didn’t give Goop an Oscar.