Back when I was around ten years old, I saw a show on Discovery Kids Latin America called Splat— which I knew as SPLAT! Animado — a documentary on animation that featured Bill Plympton’s now classic Your Face [1], as well as the MTV commercials he did [1]. Little did I know I would get to interview him years later to talk about his latest project, Cheatin’, an animated feature Plympton is trying to fund through, where else?, Kickstarter! 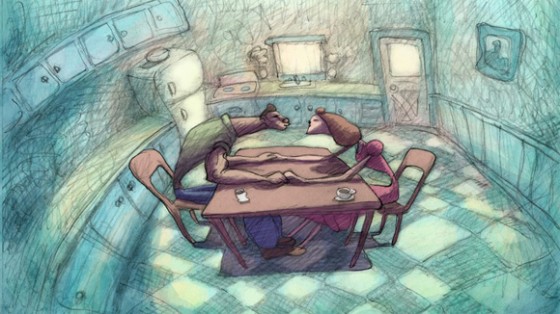 You’ve been making animated shorts for a couple of decades now, how do you think the process of making something like How to Kiss differs to the one making Cheatin’ nowadays?

Thanks to computer technology I’m able to transfer my drawings much quicker, cheaper and with more fidelity on film.

Does that mean you are still working on film for the showing of your shorts in festivals and theaters?

Not so much, we take the digital files of the finished film and send them to the festivals, the theaters or the TV stations, and they prefer the files over a 35mm print. It’s just easier for them, it’s easier for shipping, it’s better quality — doesn’t have scratches or imperfections like dirt and dust in the print.

I’m not sure we’ll be making any film prints because most of the big festivals like Cannes, Annecy and Sundance don’t require film prints anymore.

Tell me a little bit about Cheatin’, it seems a bit more of a passion project than the shorts you’ve worked on in the past. What attracted you to the style of animation or story?

The Cheatin’ film is a blend of influence. The film noir of Hollywood in the 40s. Films like the Postman Always Rings Twice, Double Indemnity (both by James M. Cain) and the art style of Thomas Heart Benton and N.C. Wyeth.

I also freed myself from strict character design and continuity. So this film is a lot looser and jazzier than my previous features.

What’s the process like for a project like this? Do you sit down and storyboard as wild as possible, or do you just sit and start animating with a vague idea of where you’re going?

It’s really important to storyboard. For me, storyboarding is probably the most critical part of the film because so many of the questions are answered or resolved in it. First of all the story, the character design, the editing, the layout of the art work, the costuming, the backgrounds, the camera angles, the shadows. You can also work the music queues in, as well as the sound effects and voices, of course.

All of that is resolved in the storyboarding process, so for me it’s very important to get a good storyboard. In fact, I would often show these storyboards to friends of mine, people who I respect, and get criticism on them and try to make them better.

You’ve done a couple of music videos, but I just really love how well Weird Al Yankovic’s parodies mix with your style of animation. Do you work on music videos the same way you would one of your shorts?

No, the music videos have a lot more supervision because they are commercial jobs. I have to please the artists. That’s why this feature is so much fun. I just have to please myself!

Given that musicians are considered artists as well, people tend to think they would be more open to creativity. In that case, wouldn’t it be easier to work on an animated music video to an animated TV commercial?

It depends on the musician. Someone like Weird Al Yankovic was really delightful to work for; he just said “Here’s the song, make the film and then send it to me.” He didn’t want to see the storyboards, the rough cuts nor the pencil tests. But other people like Kanye West [MV] was a lot more hands on. In fact, he came to my studio while I was drawing it, looked over my shoulder and critiqued the drawings as I was creating them. So it really depends on the musician.