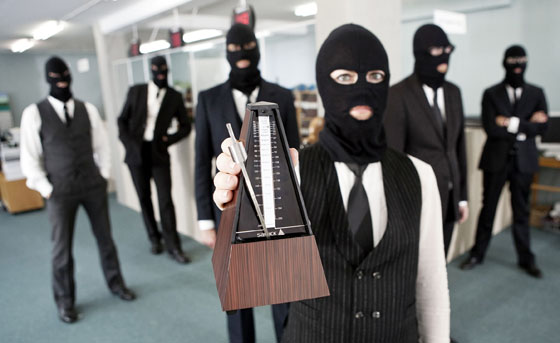 You say that you guys didn’t intend for the movie to become a comedy. So what did you want to achieve with it?

We wanted to… well what did we want to do? [laughs]

You just had an idea and went with it?

No, I was thinking more about this not becoming a comedy. We didn’t think about a genre from the get-go. Then I think, that with good movies, it becomes this way when we are writing it; it balances a bit between seriousness and humour and that it has some kind of absurdity in it as well. But that is how it is when we are writing, that it perhaps becomes funny, but it is not always that we sit down and think, “Now this is going to be funny.”

The process of writing the film has been very different along the way. At the beginning we had a lot of wonderful ideas about what to play; so that first draft was more of a concert movie. We had 15 different music scenes, then afterwards, when the police started to become more important in the story, it became four important and big music pieces that we kept. Then there were other music scenes as well, but that is what we ended up with. We wanted that for every scene: that it didn’t become as a musical, which I personally really like, but there they stop the plot for a second and you sing or dance. Here we wanted the plot to evolve with the music pieces.

As I mentioned earlier, I haven’t had the opportunity to see the entire movie. But what I have gathered from the trailer, I can imagine that it has been quite difficult to do the musical scenes. Did they take a long time to execute?

For example, we knew that we were going to do a concert with road machines, so we had to look up a road machine that we thought sounded good, as well as a bulldozer and an excavator, then record the sounds and give them to the composer Magnus Börjesson. He is credited in the movie as Magnus Börjesson as well. He doesn’t play himself, but he is a composer in real life and the movie. We gave him all these sound files to make music of. 23 000 files to be exact.

He counted them just the other day. It was very overwhelming. He was about to go crazy some times during the production.

I can imagine. I go crazy from just trying to compose one song.

You do, don’t you? But I think he has done an amazing job. The drummers have also been involved, not only with looking for the sounds, but also in the creative input; from writing the music and improvising with the objects. It has been a pleasure to work with them.

Do you have any musical background?

I have. I am a musician. I attended the musical academy (a/n: or university in Stockholm). Johannes attended Konstfack (a/n: art academy/school) here in Stockholm. We have known each other since we were seven years old, but we had different directions [in style], although we always did things together since primary school. During “fun hour,” we created class plays. So while he attended Konstfack, I went to the music academy and that is when we started to do movies.

Well, that sounds logical in a way. Like the perfect connection between those two art forms.

Yes, that is correct.

It is a little how we work with YAM. I write, and my friend is really great at making websites. So we started to do something together, and it became a virtual magazine.

So, what do you play?

I play the bass and sing. I am actually a qualified song pedagogue

That is one huge step! From song pedagogue to movie director.

Yes, and sometimes we still get amazed that we are doing this. That we actually work with film. It hits me sometimes that this wasn’t what I planned.

Yes, but that is how life is.

You can read the review for Sound of Noise here.