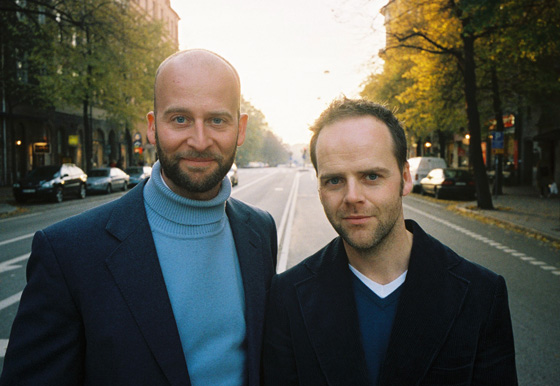 Yes, but it hasn’t been shown here yet, right?

I know! I thought it was a bit sad that I didn’t get to see the movie before I had to interview you. Funny thing is that I was at the museum of music, I think it was like a year ago? Well, there I saw your short movie (Music for one apartment and six drummers)

Was it shown there?

Yes it was. I think it was an exhibition about music you can create with objects.

Yes, I think I know about that.

Yes, I was there working, and me and my co-worker started to try and create music with pans. So it’s easy to assume that Sound of Noise is a continuation of that short movie?

But what inspires you to create a movie about sound and “sound-terrorists”?

It started, of course, with the short film. After that, we felt that we were quite through with it, but that (short) film got such a spread. We thought that we might have done a film that was suited for musicians or people who are interested in this kind of art; making music out of objects, so we thought that we had done a very small film.

Then it was shown in Cannes, and it got spread all over Sweden. It went from being a short film, to being a short film shown in cinemas that became quite popular. A lot of people saw it, and then suddenly the phone started to ring. People wanted us to play it in different places.

During that time, me and Johannes were working with other documentaries and short films. We were writing two long feature film scripts because we felt that we should start working towards that direction. However, while working with the drummers on these different “performances,” new ideas started to pop up all the time.

In the end, we had a huge bank of thoughts and ideas about new scenes, that it could be fun to play in a hospital, for example, on a patient.

I thought that was very ambitious when I saw it in the trailer.

Aw well, yes. So in the end we thought, “Well shouldn’t we do a movie with these drummers?” That was the start of it. From the short film we had already established two elements: it was partly the music and partly the criminality. With that, I mean criminal musicians.

In the movie, we wanted to bring it up to yet another level, that (the drummers) would play on a whole city instead of just one apartment. That leads to chaos, and that is how the police came into the picture, that they had to catch these criminals.

I can imagine that you guys get compared to the group “Stomp”. How are you different from them?

We don’t dance. I think that if you ask most drummers, they will say that they don’t dance.

Is that true? Because you need to have good rhythm to dance, and rhythm is something all drummers must have, so they should be able to dance [laughs].

Yes, yes. But many of my friends that are musicians, well many musicians usually sit down instead of dance, but that just might be a small prejudice I have.

There is much writing about you (the directors), about how talented you are and, of course, of the awards you received in Cannes. Do you think this contributes to you feeling pressure now that Sound of Noise is opening here in Sweden?

It has been shown in (film) festivals during October and November, so me and Johannes have attended about one festival per week, and it has been a lot of fun. When it was shown in Cannes, afterwards, the audience approached us and said: “This movie is going to do well in France, this is exactly French humour!”

Then, we showed it in the Czech Republic, and afterwards the audience said to us: “ This is exactly Czech humour!” Same thing when we showed it in Spain. It is a little bit weird because we didn’t intend to be funny. The movie just turned out that way. Of course, we had fun while writing it, but it is not as we sat down and wrote jokes. So I think that humour arises while we worked on it, and in retrospect we did notice that this was going to be really funny.

During the time, now that we have been visiting different festivals, I have become more and more nervous about this date today when it is being shown for the Swedish audience for the first time. So it is going to be very interesting to see how it is going to be received tonight. That is what I am looking forward to, but I feel no pressure. I can’t hardly do anything. The movie is already done. I can only feel that it would be very good if people in Sweden like it.

But I would also like to add that this way of creating music is nothing new. There are many art forms, modern artists and composers that have written music by using objects. What we have tried to do is to go at it from an angle that is more pop music, to make music that is danceable and music that actually has a “groove”. Because art music is perhaps not yet…

Not yet mainstream, perhaps.

Exactly. It is not as accessible as this. It has been a challenge for us to try to make music out of objects, but to make it available. By the way, I don’t think that music needs to be that way. I think that music can be ugly yet still be good.