You mentioned Friedman and his sound work, and something my friend and I were commenting on the other day were the scores of a lot of your films. You did them yourself and they’re all so wildly different, from the bluegrass of Two Thousand Maniacs to the “porn-funk” of The Gore Gore Girls. How did you come into that musical background?

I’ll give you that background because that’s a question that’s not often asked, so I’m very pleased to answer although you may not be pleased to hear the answer. When I was a kid I took violin lessons. Everybody I knew was taking violin lessons, my mother insisted I take violin lessons. One problem I had was that my hands are too big, so I wish she had said to play the cello! [laughs] I bring all that up to point out that I had some background in music; I could read notes, I had some notion of the difference between treble and bass clef, and I didn’t want to pay anybody. Here I had made Blood Feast and never was a movie made in color with fake sound as cheaply as we made that because I wasn’t certain that any theater would dare book it and whether any theatergoer would pay for admission, so I was watching every cent of budget!

So I’m getting the estimates to score that picture and I knew exactly what I wanted: weird sounds. I wanted a cello, which can give you very weird sounds if you handle it right. I wanted a trombone, same thing there. I wanted kettle drums and I wanted just an organ for chords in the background. Certainly nothing that Mozart or Shostakovich would be proud of, but it was the kind of sound I wanted. I was getting estimates to score that picture that were more than the movie cost to make! I said, “This is insane!” and that is when I decided to score it myself. Consequently, I felt a triumph you don’t often feel shooting movies, when this notation I had made to score that picture turned out to sound the way I wanted it to sound.

In picking up musicians, I had a trombone player, I had a cello player, and I had rented kettle drums from a place in Chicago called Frank’s Drum Shop. Maybe, without thinking about it, I didn’t get a kettle drum player. So in the scoring of Blood Feast, I played the kettle drums. Without even thinking about it, like ‘How much musicianship is involved here?” Years later, somebody told me that the famous conductor Leopald Stokowski didn’t qualify for membership in the musician’s union, so they qualified him on the kettle drum. [chuckles] So I can say, “Hey my buddy Leo and I played the same instrument!” [laughs]

But inevitably when something costs very little does better than something that costs a great deal, criticism starts winging in on all fours. The point I would make is that the pieces fit together for what they’re supposed to be, and that’s the reason why. In an era in which movies, six months after they’re released, vanish forever, there is this ancient piece of craft that still shows, so your honor, the defense rests. 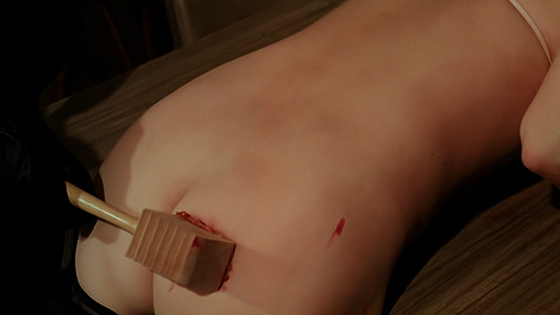 The meat-tenderizer scene from The Gore Gore Girls (1972)

I think a lot of criticism of low budget films comes from the point that they’re not made to a certain standard that’s expected for modern mainstream movies. I know a lot of criticism comes in on something like The Gore Gore Girls for not being a “serious” work, but in reality, it’s a comedy.

And what’s wrong with that?

Exactly. A lot of people try to take it seriously, but when you have a woman being beaten by a meat tenderizer, seasoned with salt and pepper, and the entire scene with the nipples and gushing fluids, I don’t see how people can try to criticize it as a “serious” work.

I love you for saying that because the severest critics are those who look for something with which they themselves are uncomfortable. That is not the point. I don’t mind having some people react with discomfort as long as other people say, “Hey you gotta see that.” And my theory always has been – nobody walks out of a theater because of a ragged pan, they walk out of a theater because they’re bored.

No matter how big the budget is, no matter how much they’re paying their stars, no matter how expansive their crews are. What matters is somebody at whom you’re aiming this movie saying, “You’ve gotta see that.”

Agreed. So, out of curiosity, how did you come up with that meat tenderizer scene?

Oh just joking around. That’s one benefit of the kind of movies I make. I don’t know if you’ve seen my most recent excretion, which is called The Uh-Oh Show.

I haven’t yet, but I’m looking forward to it.

Oh, you’ve gotta see that one. A lot of the business in that movie came up as we were shooting it. I object, not just to the auteur complex, but to the dictator who says, “I’m in charge here and nobody questions my work.” That to me is a short road to having mistakes wind up on the screen. On my set, if you’ve ever been on one or talked to somebody who’s ever been on one of my crews, these people will tell you that any suggestion from any source that’s made with the intention of having a more playable picture is listened to absolutely. The result can’t damage the movie, it can only prevent it.

You can only make something more entertaining that way. 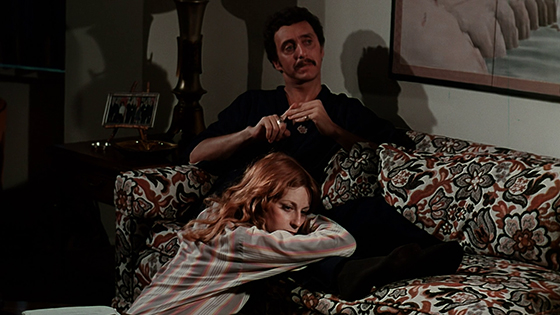 Frank Kress and Amy Farrell in The Gore Gore Girls (1972)

I also wanted to ask, because you do work with a lot of nobodies on movies, about Frank Kress, the lead actor for The Gore Gore Girls. He was one of my favorite lead actors due to his comedic timing and faux-foppishness, so how did you find him?

He was a Chicago actor and I just picked him up. And, this is lost in history, but that may not be his actual name.

There’s always been some sort of dividing line in the movie industry between those who take Screen Actors Guild as gospel and those who say, “Well I’m a member but I’ll be your movie and use a different name.” People have to work and I admire anybody who shows up on the set on time and has a moderate amount of talent. It’s quite obvious that whoever plays a role in one of my movies is of less consequence than what the effect will be, so actors become secondary, although now with the amount of CGI around, actors are becoming obsolete. But their purpose is to move the plotline along at at least a respectable pace. In that situation, because The Gore Gore Girls was the last movie I made for a long, long time, I lost touch with many of the people with whom I had worked before, and I guess this is one fella who either went off into some other direction or what I don’t know. And he was also most cooperative on the set, and on a low-budget movie where you have to know at 10 in the morning that you’re going to be shooting at 4 that afternoon, cooperation is a major factor, much more than talent.

I can imagine. Since we’re on the topic of your last film for a while, around that same time you made a couple of sexploitation films and those have just been released on blu-ray. I saw a couple and they were really just strikingly different from anything else you’ve done.

They may not have been my movies. I saw this online somewhere, someone referred to “The Lost Movies of Herschell Gordon Lewis.”

Those were the ones.

Oh, they’re not mine! Most of them are Tom Dowd movies. Now, I first met Tom – a very dear friend – when he ran a theater in Chicago called the Capri at the South end of the Loop, and he played oddball pictures. I had made a little nothing movie, we shot it in two days I think, called The Adventures of Lucky Pierre and Tom agreed to play that movie. And we crocked it with that unbelievable movie! Tom subsequently saw that there was money to be made in production and exhibition, so he said, “I’m gonna make movies myself, you wanna direct them for me?” Well sure, that’s what I do!

So he would make movies, and Tom had this fetish [chuckles] where he insisted that everybody have a French name. All the actors had French names, but none of the films were in French. They were all quite conversational and in English, but that was his feeling of giving them some artistry and I would direct his movies for him; we made about a half a dozen movies together. But those were not my movies, they were Tom Dowd movies. These so called “lost films,” they could have stayed lost. I was in and out, I got paid, and I had nothing at all to do with the profit/loss situation on those.

Now Black Love! That was a different story too. Black Love was produced by a Chicago owner of a Baskin-Robbins franchise, Robert “Bob” Smith, and he literally approached me and asked me to direct a movie for him. And certainly I did that, that’s what I do! So I made a deal with Bob Smith to shoot it, he cast it with people he knew, he set the locations – none of which was in a studio by the way – and I simply showed up to shoot it.

I’m glad I asked that because it certainly clears a lot up.

Yes I’m glad you did too.

[Talk about Lewis’ latest films and modern horror on the next page!]