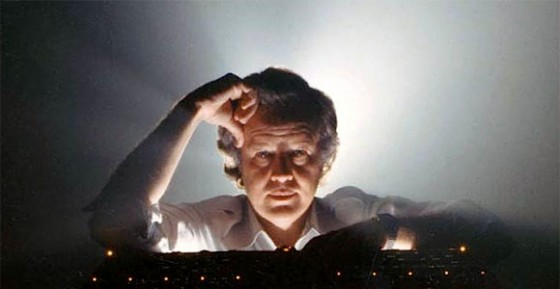 Oscar nominated visual effects wizard Douglas Trumbull has worked his magic on such iconic films as STAR TREK, BLADE RUNNER, 2001: A SPACE ODYSSEY, and CLOSE ENCOUNTERS OF THE THIRD KIND. He was gracious enough to take a few moments to talk with me about 2001, larger than life cinema, and a particularly exciting upcoming project…

Douglas Trumbull doesn’t consider himself a film historian. In fact, he readily admits that there are a whole bunch of classic films that he has never seen. This may seem odd, considering the fact that he has worked on films that themselves are classics. However, the reason for it makes complete sense:

I don’t like having thoughts in my head that are derived from other movies.

While he tips his cap to men he’s worked with — specifically Lucas and Spielberg — who are able to transpose material from John Ford movies into the science fiction genre, he prefers to start from scratch. “I like to have ideas myself,” he tells me, “whether someone has had them before or not.”

Trumbull is in Toronto to kick off a special run of Stanley Kubrick’s 2001: A SPACE ODYSSEY at the TIFF Bell Lightbox. For the next four weeks, the cerebral science fiction classic can be seen in a medium few get to experience anymore: 70mm. When I mentioned to Trumbull that 2001 is sometimes an answer to my “unseen classic or essential question,” he points out that it needs to be an immersive experience.

He notes that the film was designed and created for Cinerama, back in the days where there were deeply curved screens that were 90 feet wide. This created an experience that, in certain aspects, was even more immersive than IMAX. When reduced to tv, the immersive experience is lost. So one could look at 2001 without knowing that they’re supposed to be in the movie, not looking at the movie.

“The cinematic language of 2001 is largely dependant on the giant screen and the engulfment of it. If you really want to understand the potential of the film, you need to see it that way.” So in other words, where 2001 is concerned, watch it big and watch it loud.

For the complete interview head over to The Dark of the Matinee.